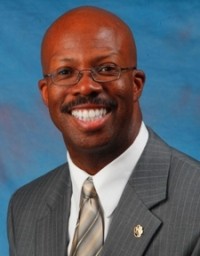 Johnson will begin his one-year president-elect term on March 15, serve as president the following year, and serve a third year as past-president for the organization.

“I am deeply honored and humbled to have been selected as the NASPA president-elect by my student affairs colleagues,” said Johnson. “Being voted into an international leadership role by one’s peers is a major career milestone. This recognition not only reflects a commitment to the profession through NASPA over the years, but also demonstrates a sense of respect for what we have accomplished in supporting student life and student affairs practitioners at Butler University. I’m very excited and ready to contribute to the student affairs profession in this new capacity.”

Johnson – better known as LJ on Butler’s campus – has been a member of the University’s Student Affairs department since 1992 when he was assistant dean of students for residence education. Following some time as associate dean for student affairs, he was promoted to vice president in 1997.

During his time as VP, Johnson has been instrumental in the expansion of student facilities on Butler’s campus — including a health and recreation complex, apartment-style housing and a diversity center.

Johnson is the former regional vice president for NASPA IV-East. He also recently served as an adjunct faculty member for the Student Affairs and Higher Education master of science program at Indiana State University.His past civic activities include serving on the board of directors of the 21st Century Charter School, the Fountain Square Charter School and College Mentors for Kids, Inc.

He has been recognized as a Fox 59 “Unsung Hero,” was the recipient of the Indiana Council of Black Executives Award for Service, and was named a Butler University “Top Dawg” in 2005. Johnson was recently chosen as a finalist in the field of education for an Inspire Award through College Mentors for Kids, Inc.

Johnson received both a bachelor’s degree from Marquette University, master of science in higher education administration from Southern Illinois University-Carbondale and a doctor of education degree from Indiana University.