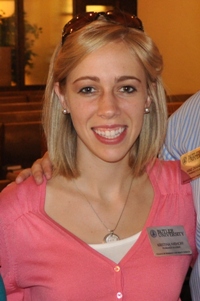 Why did you choose Butler: The first time I stepped on Butler’s campus, I felt something special. My dad went to pharmacy school at Butler, so I had certain ideals of what Butler would be; however, Butler has far exceeded these expectations. As I engaged with tour guides, faculty and students, I began to realize what amazing opportunities Butler had to offer. I was interested in leadership, volunteering and academics – all areas in which Butler excels. Further, I love the small class sizes that foster personal attention from engaging interactions with professors, along with the competitive atmosphere of Butler’s athletics.

Most memorable academic experience(s) at Butler: My favorite memories from pharmacy school happened in the pharmaceutical care lab. It is there that many hands-on experiences have helped mold me into a more competent pharmacy student: making creams, sunscreen, Chap Stick, and capsules while compounding IV’s to dispense in a hospital. The information and practical skills that I developed have already proven to be a necessity for my future career. I enjoyed the relationships I developed with professors, lab assistants and fellow classmates as each week we embarked on a new adventure to delve deeper into the world of pharmacy. My experience proved so meaningful that I became a lab assistant to help educate and mentor the younger students in gaining a knowledge base on how to perform pharmaceutical tasks. This experience provided a fun and interactive atmosphere that was grounded in the fundamentals of pharmacy.

Activities you’re involved with outside of the classroom: I am currently a volunteer director with the Butler University Community Outreach Pharmacy, an entirely student-run pharmacy located on Indianapolis’ Eastside. I am also president of Pharmacy Class of 2012 and a volunteer coordinator for Phi Lambda Sigma. In the past, I have volunteered with the Indiana School for the Blind, Big Brothers Big Sisters and was a Spanish tutor of Hispanic adults. I’ve also held various positions with my sorority Delta Gamma.

The most important thing you’ve learned at Butler: The key to having a successful college experience is staying involved and meeting people that have similar, as well as different, interests than you. During my time at Butler, I began volunteering in the Indianapolis community. I have met amazing people both within Butler and outside of our “Butler Bubble.” There are many great opportunities for students to become actively involved in community service. I became very involved with the Butler University Community Outreach Pharmacy (BUCOP) this past year. I have taken my knowledge from the classroom and applied it in a situation where service is not a concept but a reality. As part of the BUCOP, I counsel patients on their prescriptions, as well as offer advice to the medical students and physicians. I value my time spent at the clinic both as a learning opportunity and as a way to give back to my community. Butler has instilled in me the importance of community service, where my well being and another’s are interdependent. The education I have received at Butler has ensured that I will incorporate the value of service into my career beyond my time at Butler.