The honors are rolling in for Butler Professor of Music and Director of Bands Robert Grechesky. 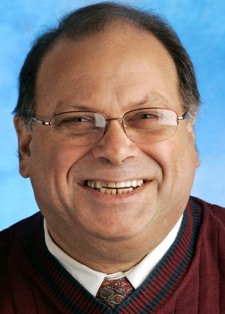 The Indiana Music Educators Association (IMEA) has selected Grechesky as this year’s Outstanding University Music Teacher of the Year, and the Indiana Wind Symphony will present him with the James B. Calvert Lifetime Achievement in Music Award at its May 21 concert at the Carmel Palladium. As part of the honor, Grechesky will guest-conduct the wind symphony performing Aaron Copland’s “Emblems.”

“It is, indeed, a humbling experience to be recognized by your peers in such a way,” Grechesky said. “I am deeply grateful for the opportunities I have had over the years to be involved with this glorious and noble art of music and the profession of music education. To be able to have daily contact with both music and the amazing students we have had at Butler over the years is a blessing not to be taken for granted.

“Yet I am reminded of a statement made by a colleague of mine, who, when told of his receiving a professional honor, said: ‘I am both humbled and grateful for this recognition. But I really thought it was an honor that would come to me later in life.’ To which his friend replied, ‘Dude, it is later in life!’”

Grechesky received the IMEA Award at the organization’s convention in Fort Wayne Jan. 21 and 22. He was nominated by his colleagues, students and former students, who wrote letters of support thanking him for his hard work and dedication to music education.

“He has provided a tremendous amount of support to me, encouraged me, challenged me and most of all supported my growth as a teacher and a musician,” a colleague wrote. “His infectious sense of humor remains one of his most endearing qualities.”

A former student added: “I challenge anyone to travel anywhere and find someone that has a bad word to say about Dr. Grechesky. Everywhere he goes, he leaves a trail of laughter and respect. Try it next time you travel and bring up his name. I have. And every time they smile, nod their head and say, “‘Ah yes, Dr. Grechesky. Great Guy. You know him?’”

The Indiana Wind Symphony’s lifetime achievement award will be presented to Grechesky in recognition of “his long involvement with Butler University and the significant work he’s done there, and also his work with the Indianapolis Youth Wind Ensemble and the Indianapolis Brass Choir,” said Charles Conrad, the wind symphony’s music director.

In addition to his duties at Butler, Grechesky serves as director and conductor of the Indianapolis Brass Choir and performs regularly with numerous ensembles throughout Indiana. He has served on IMEA board, was a former editor of Indiana Musicator and served on a task force to rewrite fine arts curricula for the Indiana State Board of Education.

Grechesky is the author of two books on band repertoire as well as numerous magazine articles and CD program notes. He is the recipient of seven Butler academic grants and fellowships and received a Lilly Fellowship.

Grechesky has taught at Butler since 1973.

“Bob brings a musical seriousness, a gravitas, to bands,” Conrad said. “A lot of times, the band world is treated as simply an adjunct of education and not really given the same kind of musical weight as orchestra, opera, ballet and some of the other disciplines are. One of the things I’ve always liked about Bob is that he treats band with the same authority and importance as a subject that a lot of times you do not see.

“And his willingness to work with students of all ages and all levels has been commendable. He does a lot of clinics for high school and middle school bands, a lot of practice adjudicating sessions and a lot of consulting about programming. He’s really involved with music education at all levels.”