Butler Newsroom > College of Communication > Minner at the Mike
Undergraduate Business Program Moves Up in BusinessWeek Ranking Bulldogs Win the Horizon League, Head Back to the NCAA Tournament

Minner at the Mike

While Mark Minner may still be a year away from graduation, he is already a well-known sportscaster to anybody who follows Butler athletics. 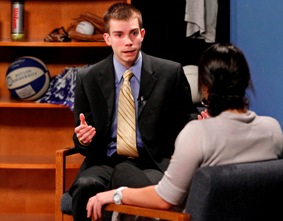 Most Bulldog fans know Minner, a marketing/electronic journalism major, as the studio host for halftime and postgame shows during the broadcast of men’s basketball games on the Butler Basketball Radio Network through 1070 The Fan. And as the play-by-play announcer for video feeds of Butler’s volleyball, soccer and women’s basketball games, shown on HorizonLeague.com. Minner, a polished sports commentator, also writes, produces and hosts the Bulldog Blitz, a weekly Butler sports video recap available through Comcast and YouTube.

Taking advantage of all these opportunities keeps Minner busy. At 11 p.m. Thursday night, Minner writes the script for Bulldog Blitz. He emails the script to Professor Christine Buck-Taylor, so that her Video Production 2 class is ready to tape Minner hosting the show in the Fairbanks television studio Friday at 10 a.m. First thing Friday morning, he puts on his hosting uniform – a suit and tie – so that he can squeeze in the taping between classes at 9 and 11 a.m.

Minner has developed this routine over two-and-a-half years, while contributing to all 50 editions (so far) of Bulldog Blitz. He has produced and hosted all but eight.

His efforts earn him one credit hour per semester. “You can’t let yourself get tired,” he said. “There are so many opportunities. You can’t let them pass you by.”

Minner and some senior media arts students started Bulldog Blitz in fall 2008. By the second semester of his freshman year, Minner had succeeded graduating senior Cory Schnurbusch as producer of the Blitz. (Today, Schnurbusch reports for Cincinnati’s WXIX-TV, under the professional name Cory Stark.)

One of the biggest challenges of producing the Blitz, Minner said, has been the regular semester turnover of student reporters and production crews. Some of his best collaborators — associate producers Peter Repasy and Aaron Fletcher and Adam (“The Tech Guy”) Bonner — have moved on to new time commitments this spring.

“Aaron redesigned all the show’s graphics. He’s good at his craft,” Minner said. “He commutes to Butler from his home in Columbus so he really made an effort to be part of the shows.”

Buck-Taylor directs the Creative Media and Entertainment (CME) program. She said that in the past, the Blitz was produced by students enrolled in lab courses under the direction of CME faculty.

“This semester, we added Bulldog Blitz production to the production of Butler Beat, a joint project of Scott Bridge’s Advanced Reporting class and the CME Video Production 2 class,” she said.

Bulldog Blitz is the first on-demand, student-produced show that Butler has offered in partnership with Comcast cable system, to its potential audience of 1 million viewers.

Butler students have created TV news and sports programs offered to the community for most of the last 20 years, Buck-Taylor said. Many were produced for WTBU, a full-power public TV station operated on campus from 1992-2003, and some shows aired on public station WFYI. Later programs were shown on campus cable.

The Butler Beat (or some form of news) and Bulldog Blitz have been offered online since the campus cable station went dark in 2006, according to Buck-Taylor. About 22 students and two faculty members are currently involved in the two shows’ production. “It is really a team effort among our students and faculty,” she said.

Minner, she said, has been the “most stable element” in maintaining Blitz production through his pre-production planning and gathering content.

Minner appreciates the consistent program support and the way the College of Communication (CCOM) brings disciplines together for collaborations. Butler’s previous arrangement of having media arts and journalism programs in separate colleges “made no sense to me,” he said. “CCOM needed to happen.”

Majoring in both electronic journalism and business, Minner will have an even more crowded schedule as a senior next year. To earn his business degree, he must complete two internships before graduation.

“It will be difficult to manage, but I still want to do Bulldog Blitz,” he said.