Debbie Ruiz, a Warren Central High School senior, said she learned a number of things about being a news reporter by participating in a June 19-26 multimedia workshop sponsored by The Indianapolis Association of Black Journalists and Butler’s Eugene S. Pulliam School of Journalism.

“Reporters have to report on and write a story on the same day,” said Ruiz, who followed WISH-TV (Channel 8) anchor Deanna Dewberry on the job as part of a workshop internship. “They have to do it really fast.” 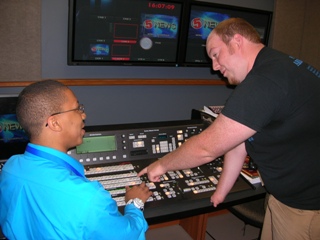 And, writing for a newscast differs from writing school assignments, she said. “In school they want us to be more wordy, to show that we know different words. A broadcast script has to be plain and simple.”

But most surprising to Ruiz was the fact that, if a reporter covers an event at which refreshments are served, “they can’t take any of the food!”

Ruiz was among 15 teenage participants who spent the week interning with area media professionals and working in classrooms and studios of Fairbanks Center for Communication and Technology, home of Butler’s College of Communication (CCOM).

Leah Johnson, who spent the week studying print journalism, was impressed with Loni McKown’s emphasis on “how important reporting the truth is.” McKown is a professional practice faculty member in Butler’s journalism program.

DMarcus Pulce, a recent Hamilton Southeastern graduate, liked McKown’s insights from her time as an investigative producer for TV and a reporter and editor in print news. “She’s been in the [news] business. That’s a real benefit to her students,” he said.

Pulce combined videotaped segments of the students’ workshop projects into an edited half-hour broadcast of news and information. “DMarcus was fantastic and was very familiar with Final Cut Pro and Mac technology,” said Associate Professor of Creative Media and Entertainment Christine Taylor. She spent three days with the students as they wrote scripts for the news program and produced them in the Fairbanks television studio.

“Students learned about deadline pressure and worked very hard to complete their assigned tasks,” Taylor said. “They worked well together as a team and contributed content across the platforms to produce both a TV show and an online product. It was quite impressive.”

Pulce explained that the show’s title, “5 Rights,” referred to rights guaranteed in the first five amendments of the U.S. Constitution, rights originally promoted and safeguarded by a free press. “Writing and journalism got those rights for us,” he said. “Journalism is what got us here.”

Cameron Ridle of Perry Meridian High was the anchor and a reporter for “5 Rights.”

“This is my first time to work with a Mac,” said Ridle. “I got to pick out the music, design the logo and write the teaser introductions.” (He’s pictured at left with Adam Bonner, working with the switcher, equipment that allows directors to assemble a show live to tape. Bonner received his electronic media degree from CCOM in May.)

Ridle job shadowed WRTV (Channel 6) reporter Rafael Sanchez during the week. “I’ve been to Channel 6 lots of times, but I had more time this week to get more detail,” he said.

Before starting her public relations internship at the office of Borshoff PR, Cathedral High School senior Ridley Morgan got a good grounding in “PR 101” from Ed Kanis. A veteran of the profession, Kanis is an instructor in CCOM’s Strategic Communication: PR & Advertising program.

He reminded students that public relations goes beyond the stereotype of simply fronting for celebrities, according to Morgan. “He said you represent all kinds of people 24/7, and that the glamour and glitz is not always there.”