Butler graduate and College of Education Board of Visitors (BOV) member Mark Weaver was one of five educators inducted into the National Teacher Hall of Fame for 2011. 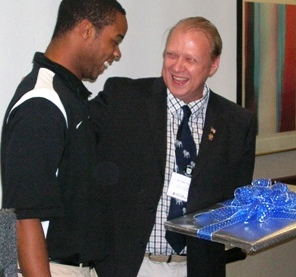 Chair of the science department at Clay Middle School north of Indianapolis, Weaver has taught grade 7-9 science there for 29 years. At Butler, he earned a B.S. in botany with certification in education in 1981, and a master’s degree in education in 1983.

Weaver has received several previous teaching honors, including State Teacher of the Year 2004, a Lilly Educator Fellowship Grant, the IPL Golden Apple and national awards from the Fulbright Program, Disney, the Milken Foundation and NASA.

On the Hall of Fame website, Weaver’s colleague Tracy Krause described how Weaver’s teaching practices “go above and beyond” those of most teachers:

“He brings the science world into his classroom. When he is teaching about seafloor spreading, his classroom becomes the ocean floor. It is dark and full of ocean sounds with mists of water all around you. When he is teaching about the constellations, you step back in time and meet the gods and goddess who share with the students their stories about why the constellations have the names they do. His students leave his classroom with excitement and wonder. Many of them return years later just to thank Mark for how he inspired them during their time as his student.”

Teaching, Weaver said, “is one of the best jobs you can have.” But, he added, it comes with responsibilities. “You want to provide excellent opportunities for your students and always improve upon that the next time. I love trying new things, experimenting on my delivery to students.”

One of his most successful experiments was the creation of a nature preserve and outdoor learning center beside the school’s storm-water drainage pond. Having a supportive principal helped, he said, as well as students and graduates who’ve maintained the habitat’s trails and added a shelterhouse. Other teachers, Scout groups and the state Department of Natural Resources all use the two-acre property for education sessions.

Weaver doesn’t rely heavily on textbooks. “The true definition of science is the study of anything and everything,” he said. “People say, ‘Aren’t you worried about covering the state standards?’ No, I’m not worried. It’ll be done in the way that the material is taught. It gets done during the course of the year.”

He credits professors in both COE and the College of Liberal Arts and Sciences for encouraging his interest in experiential learning. Botany and biology faculty showed him how to work with plants in the Butler Conservatory, even providing him a nearby office. He became such an expert that he wrote a plant column for The Collegian,Butler’s student newspaper.Students leaving campus for holiday breaks entrusted hundred of their houseplants to his care.

COE faculty have “a passion” for learning about and supporting their students, “that has never been negotiable,” Weaver said. “They spend time with each one, get to know them.”

He recalled their support when problems arose in one of his student-teaching placements. “Dean Joe Nygaard informed the school, ‘This is not satisfactory for our student.’ And Butler found me a new assignment,” he said.

Weaver has served for several years on the College’s BOV. COE and other BOV members saluted his Teacher Hall of Fame selection at their May meeting with a special gift, presented by education major and Butler men’s basketball team member Ronald Nored (pictured left, with Weaver).

The gift was framed newspaper articles on the Bulldogs’ success in the 2011 NCAA tournament and Final Four games, competitions that Weaver and his mother, Barbara Weaver ’56 LAS, followed avidly. Basketball Coach Brad Stevens had autographed the articles, and Weaver asked Nored to add his signature as well.

“They’re winners,” he said, “even if they had never got into the NCAA tournament, because they’re good people. Generally speaking, people [at Butler] are good, and they always have been.”