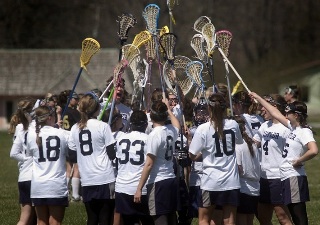 Maddi Corry, Elizabeth Erb, Mary-Bridget Adkins, Kelly Marie Borter, Clare Hubbard, Megan Chadwick and Stephanie O’Brien were among 135 women honored for playing in a WCLA program while achieving a grade point average of at least 3.7 on a 4.0 scale.

“Women’s lacrosse is one of many club sport teams composed of dedicated Butler students who work hard each week planning and organizing practices and tournaments, all while achieving exceptionally high standards in the classroom,” said Eric Kammeyer, Butler assistant director of recreation-intramurals/club sports. “Women’s lacrosse has been extremely successful in recent years [due] in part to their devoted student membership, who run fundraising events and clinics for local youth, and to their alumni base, who volunteer their time and money. Each year the students, along with their dedicated coach, Joe Harsh, set a higher goal on and off the field and find a way to achieve it.”

Butler has had 31 women’s lacrosse players selected for this honor since the team started as a club sport in 2006. The team finished the 2010-11 season with an 8-6 overall record (5-2 in the Women’s Collegiate Lacrosse League) in competitions against schools such as Purdue, Ball State and Ohio State.

Club sports are student organizations recognized and advised by Butler’s Recreation Department and the Club Sports Council. Most club sports practice 2-3 times a week and then either host or travel to regional or national competitions. All of them have callouts in the fall to inform and accept new membership.