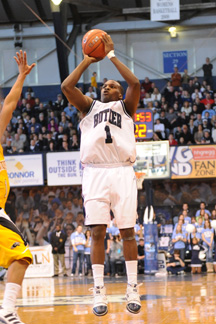 Guard Shelvin Mack became the second Butler player in 12 months to go from the Final Four to the NBA on Thursday (June 23). The Butler junior was selected in the second round of this year’s NBA Draft by the Washington Wizards.Mack, who helped lead Butler to a second consecutive Final Four in 2010-11, follows in the footsteps of former teammate Gordon Hayward, who was selected ninth by the Utah Jazz in the 2010 NBA Draft. The two gifted players were part of Butler’s 2008-09 freshman class.

“I’m excited and happy for Shelvin,” said Butler head coach Brad Stevens. “Like we did with Gordon last year, you take great pride in a guy that came to Butler, had a great career and is better off for his experience here, and Butler certainly benefitted from his time here. At the end of the day, we feel very good about Shelvin moving forward, and he won’t have any bigger fans than us.”Mack, the No. 34 overall pick in this year’s draft, was the second-leading scorer for the 28-10 Bulldogs in 2010-11. He played in all 38 contests, including 37 as a starter, and led Butler is assists (131) and three-point field goals (87). The 6-3 backcourt player averaged 16.0 points on the season, but boosted that mark to 20.3 during the Bulldogs’ NCAA Tournament run. He set a Butler NCAA Tournament scoring mark with 30 points in the Bulldogs’ victory over No. 1 seed Pittsburgh, and he tallied 27 points to help Butler defeat No. 2 seed Florida. He tallied a Butler record 122 points for the Bulldogs’ six-game run.The Butler guard was chosen the Most Outstanding Player at the NCAA Southeast Regional, and he was named to the All-Tournament Team at the Final Four for a second consecutive year. He also was named to the 2011 Lou Henson Mid-Major All-America Team, the Diamond Head Classic All-Tournament Team and the Horizon League Championship All-Tournament Team. He was selected second team NABC All-District 12 and second team All-Horizon League as a junior.Mack, who won a gold medal as captain of the USA U19 World Championship team in the summer of 2009, became the 33rd Butler player to score 1,000 career points during the 2010-11 season. He finished his Butler career in 11th place on the Bulldogs’ all-time scoring list with 1,527 points. He also finished fifth on Butler’s all-time assist chart with 357 career assists.