At Phoenix Theatre, Butler Students Go Out ‘With a Bang’

Butler University will be well represented in the Phoenix Theatre production of the darkly comic show With a Bang, July 14-Aug. 14. 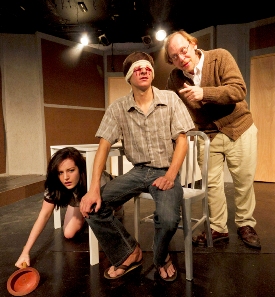 Senior theatre major Matthew Van Oss (pictured, in the blindfold) is featured in the show as John Boy, an 18-year-old blind boy who has the ability to see the see the past and multiple futures. Behind the scenes, senior theatre major Lauren Thorne is working as the assistant director, and Davison Robie ’10, a music theory and composition alumnus, is working on the sound design.

“I love this script!” Van Oss said. “It’s so fun, dirty and hilarious. Plus the fight scenes. I love fight scenes!”

With A Bang delves into a darkly comic and absurd world brought to life in a format similar to that of a graphic novel. Young heroine Margaret finds out that her father, who was writing a book that is charged with keeping the world from ending, has died – again. She is tapped by an angel to take up the task of finishing the book to literally save the world. As the end draws nigh in a torrent of blood and magic, the world comes closer to conclusion. But how?

The Phoenix Theatre is Indiana’s only professional contemporary theatre, and has presented productions to challenge and entertain the Indianapolis community for 28 years.

Tagged with → Phoenix Theatre • WIth a Bang
Please share it!