Butler University has been awarded a nearly $350,000 grant from the Small World Institute Fund, an advised fund of the Silicon Valley Community Foundation to modernize the telescope and dome in the Holcomb Observatory and Planetarium. The money for the project comes from a fund overseen by Frank Levinson ’76, who worked at the observatory and planetarium as a Butler student and went on to become a philanthropist, inventor and visionary entrepreneur in the arena of global communications and technology’s promise for improving life on earth. 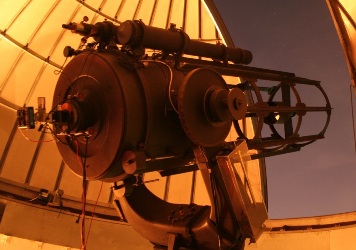 Beginning in October, the nearly 60-year-old Holcomb telescope will be enhanced with more powerful optics, resulting in sharper images from space and a field of view nearly five times the present optical configuration.

“The view will be better for the public and the telescope will be much more functional for research,” said Brian Murphy, professor of physics and astronomy and director of the observatory and planetarium.

Renovations to the dome will allow it to open and close more quickly – making it easier to capture images of rapidly changing objects in the night sky. A fail-safe system that closes the dome immediately in the event of inclement weather will be added, to protect the telescope.

Work is expected to take six to eight months. Public access to the observatory and planetarium will not be affected. The observatory is open to the public Friday and Saturday nights when Butler is in session. The full schedule can be found at butler.edu/Holcomb-observatory.

Murphy said Butler will purchase a portable telescope for observing the night skies. Visitors to the observatory will get to look through that telescope and see the permanent telescope in the process of renovation.

“All programming will go on as usual,” Murphy said. “People will still be able to see Jupiter and its moons, the moon, star clusters and nebula. It’s just that they won’t be able to look through the large scope while it’s under renovation.”

In addition to the renovation, the grant from Small World will allow Butler to put its telescope in synch with those from the Southeastern Association for Research in Astronomy (SARA), a consortium of 10 colleges and universities of which Butler is a member.

Holcomb Observatory and Planetarium has been serving Butler University students and the Indianapolis public for nearly 60 years. The observatory, one of the largest public observatories in the world, houses a 38-inch Cassegrain reflector. Students at both the introductory and advanced levels of astronomy and astrophysics use the telescope for their laboratory and research projects to study the cosmos.

Butler purchased the telescope in 1953 for $48,500; with installation, the total project cost $325,000. At the time, it was the ninth-largest telescope in the United States. Installation of the telescope in the 50-foot-high dome was done by crane and even today, a crane must be used to get the 600-pound mirror from the dome to ground level for resurfacing every five years.