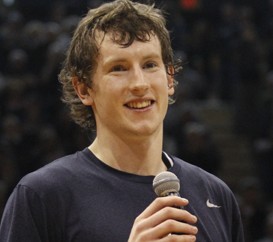 Butler men’s basketball standout Matt Howard ’11 (Connersville, Ind.) and has been named a recipient of the Horizon League’s 2010-2011 Cecil N. Coleman Medal of Honor. Howard was the unanimous choice on the men’s ballot; Kayla Tetschlag of Green Bay appeared on every women’s ballot cast.The Horizon League’s highest individual honor, the Coleman Award is presented annually to the League’s top male and female student-athletes who best exemplify the dignity and high purpose of the League and its membership. The individuals demonstrate outstanding achievement in academics, athletics and extracurricular activities. Candidates must be seniors who have exhausted their eligibility and were participants on the varsity level in a League-sponsored sport. In addition, nominees must have a cumulative grade-point average of at least 3.00 on a 4.00 scale, or its equivalent.“There are no two better models of all the Horizon League seeks to represent in terms of ideals and values than Kayla and Matt,” said Commissioner Jon LeCrone. “They are not just outstanding student-athletes, but extraordinary young people who are destined to have great success wherever life leads them.” Howard becomes the 12th Bulldog all-time to collect the Coleman Award and the seventh on the men’s side. Howard joins Jody Littrell (1990), Chris Miskel (1996), Jon Neuhouser (1998), Brandon Miller (2003) and A.J. Graves (2008) as Butler men’s basketball players to capture the honor.The forward led Butler to back-to-back appearances in the NCAA Tournament national championship game, collecting 117 wins in his four years with the Bulldogs. Leading the Bulldogs to NCAA Tournament appearances in each of his four years, Howard earned all-tournament team honors at the 2011 NCAA Southeast Regional and the 2011 NCAA Final Four. Howard pushed Butler to three Horizon League Tournament titles, collecting Most Valuable Player accolades following the 2010 and 2011 tournaments. Howard became the first player in League history to earn all-tournament recognition in each of his four seasons. The 2009 Horizon League Player of the Year, Howard earned a place on all-league teams in all four years and was voted First Team All-League his final three years.Holding a 3.764 GPA and graduating with a degree in Finance, Howard earned Capital One/CoCIDA Academic All-America honors in each of the three years he was eligible; in his senior year, Howard was named the Academic All-American of the Year. In each of Butler’s Final Four appearances, Howard was recognized as the Elite 88 winner, given to the competing athlete with the highest grade-point average at each of the NCAA’s 88 championships.“I’m really excited for Matt,” Butler head coach Brad Stevens said. “We’ve said from the day he arrived that he embodied what you think of when you think of an elite student-athlete. It’s great that he’s been recognized by the Horizon League and by others, both locally and nationally, for his commitment to excellence both on and off the court.”Along with being a three-time Horizon League Academic All-League pick and three-time Scholar-Athlete of the Month, Howard has routinely participated in Butler’s Bookin’ with the Bulldogs reading program at local Indianapolis elementary schools. The Connersville, Ind.-native has spent holiday season time serving food at the North United Methodist Soup Kitchen and has been a visitor to patients at the Peyton Manning Children’s Hospital at St. Vincent.Each Horizon League institution has the opportunity to nominate a male and female student-athlete for the Coleman Medal of Honor. A total of 19 student-athletes were nominated for this year’s honors.