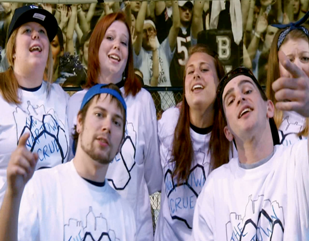 We won the heart of the nationWe got that Crowd ParticipationIt’s not a team. It’s a family.Like the way it should beWe’re making history.

In this chorus from the rap video “Are You A Dawg?”, Adam Bonner and Bryce Gergely captured the jubilant campus mood in April, when the Butler men’s basketball team made its second consecutive appearance in the NCAA Final Four games.

The pair, both May graduates of the College of Communication, co-produced the video. Gergely, the main audio producer, earned a degree in Recording Industry Studies; Bonner, who oversaw video production, received a bachelor’s in Digital Media Production.

“We collaborated with a few other students who were majors, as well as Pat Hurley [CCOM multimedia coordinator], in writing the lyrics and the beat to the song, then recorded it all here at B.U., mastered it and shot all the video, Bonner said.

“We went for a very relatable feel so that every student was involved, whether they knew it or not,” Bonner said. “It’s for the whole Butler community, not just the seven of us. I think that’s what made it lovable to most people.”

To date, the video has received more than 10,600 views on YouTube. The CBS television network aired the video twice during the Final Four pre-game and the championship pre-game. The song played on Indianapolis radio stations WNOU-FM RadioNow (100.9) and WZPL-FM (99.5) and the cable Indy Music Channel. A reporter for WTHR-TV (Channel 13) interviewed Bonner and Gergely for a story that ran the week of the Final Four.

“I’m very proud of what this group accomplished,” Hurley said. “I’ve found over the years that, if you give students the knowledge they need, allow them freedom to be creative and encourage them to produce media beyond their comfort zone, they will deliver surprising results. These kids certainly delivered.”

Tagged with → Are You a Dawg • Basketball • CCOM • Final Four • The Naptown Crue
Please share it!