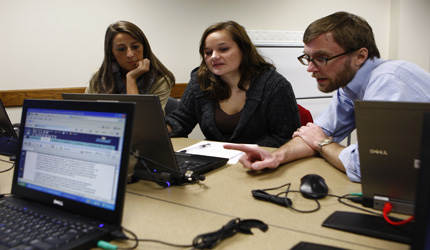 For the third consecutive year, Butler University has been ranked No. 2 in the Regional Universities Midwest category of U.S. News & World Report America’s Best Colleges. This marks the University’s 23rd consecutive year of being ranked in the top 10 for this category.

Also in the 2012 rankings, college administrators again named Butler the No. 1 “Up and Coming” school in the Midwest for making “the most promising and innovative changes in the areas of academics, faculty, student life, campus or facilities.” Butler was again named among the 27 universities nationwide whose study abroad program contributes significantly to student success, and the University ranked fifth among Midwest Regional Universities for its strong commitment to undergraduate teaching.

Butler moved up from eighth place to fifth among Midwest Regional “Great Schools at Great Prices,” and also was again named one of the region’s 37 “A+ Schools for B Students.”

Butler saw its overall Best Colleges score improve to 95 points, compared with 91 last year and 87 in 2009. Schools’ average freshman retention rate and graduation rate for 2010-2011 weighed heavily in the rankings, and Butler exceeded its numbers for the 2009-2010 academic year, moving from 88 to 89 percent in freshman retention and from 73 to 74 percent in graduation rate.

“I am pleased to see Butler ranked so highly again and proud of our students, faculty and staff, whose efforts made this possible,” Butler President James Danko said. “Our repeat selection as the No. 1 ‘Up and Coming’ school in the Midwest confirms my belief that Butler is a world-class institution, already strongly engaged in innovative teaching. A liberal arts education at Butler helps students connect theory to practice, see the integration of subjects, develop creative insights and a more complex view of their world.”

This is the third time Butler has been acknowledged in the relatively new category of “A+ School for B Students.”

“In my first year as President, I want to focus on assisting the Butler community in unleashing even more of its creative talents and energy to shape a university that is a model of higher education not even imagined by other institutions today.”

To be included in the Regional Universities category, a university must offer a full range of undergraduate degrees and some master’s degree programs, but few, if any, doctoral programs. The universities in this category are ranked in four geographical areas— North, South, Midwest and West.