Leadership lessons learned by Red SWAG, Rubber Bees, Blue Crew and seven other teams of teenagers on July 28 at Butler should now be getting a workout at the teens’ schools. 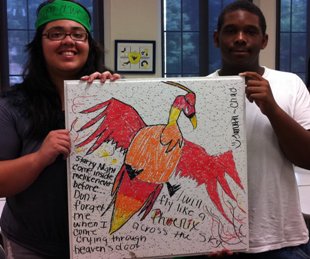 The 147 middle and secondary students from Indiana and Kentucky explored Bulldog-tested strategies for becoming leaders at their schools at a one-day camp, called Leadership: The Butler Way.

Men’s basketball coach Brad Stevens addressed the campers via a video created by Aletto, Samuel and Guthrie. “Brad made leadership very attainable for students, by starting with the need to be yourself and expanding to examples of leadership in the Butler program,” said Samuel, who also helped coordinate the premier camp in 2010.

Samuel, an assistant principal at the Ben Davis Ninth Grade Center in Indianapolis, said the principles of servanthood and unity go hand-in-hand for school administrators like himself and fellow EPPSP students.

“When you serve others, it unites people behind you,” he said. “A school’s staff and students see that you are committed to finding a way for them to succeed, that dedication is contagious and the cause of student achievement is elevated to the top.”

Photos and reviews of the camp can be seen on the Facebook page “Leadership: The Butler Way.”