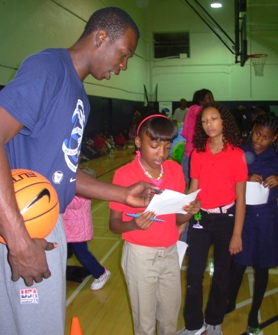 The volleyball program hosted “Beyond the Net” for students in grades 4-8 from six public and six private schools in the Indianapolis area. The day included lunch and a chance to see the team defeat Elon University 3-1 in the Butler Invitational opener.

Volleyball Coach Sharon Clark and her staff have organized “Beyond the Net” events for elementary and middle school students for the past three years. “Before the game, we try to get them acquainted with higher education and, more specifically, Butler,” Clark said. “Each year, we try to increase our attendance. Next year, we will shoot for 1,500.”

Visitors could estimate the number of beans in a jar, plot graph coordinates in a game of “Battleship,” design a necklace from geometric cutouts or try their hands at Sudoku. In a “Probability” booth, students flipped coins or drew playing cards to understand the odds of getting certain outcomes. An “Architecture” game let them practice scaling by creating blueprints.

“The games showed the kids that math is something used every day and FUN,” said Wolfe, who is an international business management major. Fowler has a bachelor’s degree in marketing and is enrolled in Butler’s MBA program.

Wolfe said that, since volleyball players and coaching staff were preparing for two games on Friday, she asked other Butler student-athletes, Athletic Department staffers and members of the Physical Education Majors (PEM) Club and Math Club to help with registration and booth staffing. 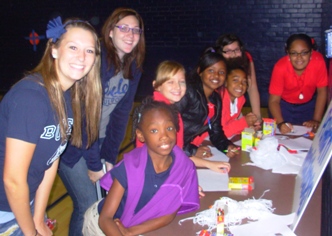 “I was very impressed with how many PEM Club students were excited about volunteering,” she said. “Lisa Farley (assistant professor of physical education) did a great job in helping me recruit them.” (PE majors shown, in top photo, Khyle Marshall with youngsters; lower photo, Ariel Rudd and Dana Smoler at far left.)

Clark said Wolfe took on event direction this fall, building on plans started by Clark’s former student assistant Dawn Jones ’11. “Dawn and I had a series of meetings with lots of folks, including the Indiana Dairy Council (which donated 1,000 jugs of milk for the kids to drink), the College of Education, Indiana Department of Education and former volleyball alums who are currently teaching in the school districts,” said Clark.

“We advertised by making a video flyer and sending it to schools and principals. It is a tremendous amount of work by my staff.”

Jones completed her master’s degree in effective teaching and leadership from Butler’s College of Education in May. She is employed by St. Maria Goretti School in Westfield, Ind.

Tagged with → Beyond the Net • Hinkle • Math • Volleyball
Please share it!