Former Butler Professor of History Thomas Willey once told a student that he liked English rock gardens. “They invite you to think clearly,” he told her. 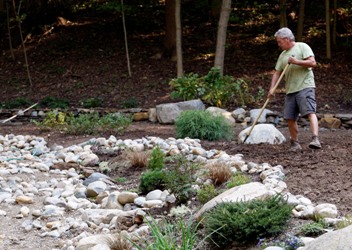 Willey also encouraged students to think about complex world issues, that alumna says. To honor her former teacher and mentor, she has given anonymous gifts to create and maintain the Thomas E. Willy Memorial Rock Garden, located behind and below Holcomb Observatory in the larger Holcomb Gardens.

The Willey Garden circles a small waterfall and pond just west of Holcomb Lake and the Carillon tower. It features native woodland plants and some 80,000 pounds of stone quarried in Indiana.

Willey taught at Butler from 1967–1972. His colleague in those years, Professor of History George Geib, said at the garden’s dedication on Sept. 15 that the space nicely captures one of Willey’s favorite notions about history: “continuity within change.” Willey, who held a Yale doctorate in European history, didn’t treat the subject “as a course in past politics.

“He taught students to think about the ideas and content of history” that continue to affect modern day, Geib said. A gifted adviser to students, Willey “was one of the most brilliant and effective faculty members we have had at Butler.”

Willey moved from Butler to McMaster University in Ontario, Canada, and died there in the 1990s.

Gerald Carlson, interim vice president for operations, thanked the donor on behalf of the University. “The garden has been a great addition to the campus,” he said, “and will allow current students, faculty and staff and alumni to have a serene place to gather and reflect.”

Ricketts spent two months regrading part of the south slope to the pond, installing plants and building a low sandstone wall overlaid with a simulated dry creek bed, or arroyo.

He said he didn’t want the refurbished area “to look all new and shiny.” Rather, he wanted it to blend in with the mature woods around it, which, by Rickett’s estimate, includes a 200-year-old oak and a 75-year-old spruce.

The existing waterfall and its base of glacially formed boulders were clearly “the best part” of the site, he said. “You can’t compete with that beauty, the stillness here.”

Flowing water inspired the rambling, curved lines of the garden’s arroyo and wall. At points, the wall looks as though it were broken down by erosion. Ricketts has suggested to Butler’s grounds crew that, if a portion of the wall comes loose, they should just toss the stones back in a casual pile.

The donor, along with horticulturist Sally Day, helped Ricketts select low-growing plants — sedum, evergreens, mounding sumac and a corkscrew willow — for “pocket gardens” at the pond’s edge. “The willow will have an interesting skeleton in winter,” Ricketts said. The largely overgrown north perimeter has been cleared of gravel mulch and replanted with ferns.

Creating the Willey Garden has been deeply satisfying to Ricketts, a landscaper since 1980. “I’ve worked on this scale before, doing commercial and industrial projects,” he said, “but I’ve never got to handcraft such a big area before.”

He also liked adding to the “legacy” of Holcomb Gardens and his personal connections to it. His mother, Jean Ricketts, attended Butler, and he remembers being 5-years-old and walking through the gardens with his father. “My dad told me there were bears in these woods,” he said with a chuckle.