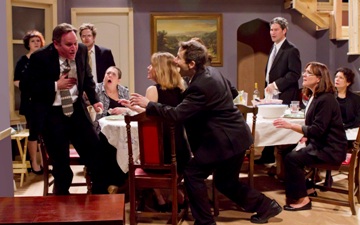 This vivid portrait of family dysfunction, which premiered in 2008, tells the story of a pill-popping mother who summons her grown daughters back home after their father disappears.

Winner of numerous prizes and critical acclaim, August: Osage County was named to dozens of “Best of” lists. The New York Times critic Charles Isherwood called the play “fiercely funny and bitingly sad” and “the most exciting new American play Broadway has seen in years.”

“The experience of working on this play is extraordinary,” Timmerman said. “Not often do you get to work on a Pulitzer Prize-winning play with such a solid group of actors, most of whom have worked together before. We’ve acted with one another and directed one another so many times over the years. That familiarity has been a fantastic base for a play that is all about family relationships and how they have evolved.”

Timmerman, who’s been teaching at Butler since 1993, has a long history at the Phoenix. Her roles there have included the crack-smoking motel dweller in Tracy Letts’ Bug and the bird flu-sneezing presidential speechwriter in David Mamet’s November. She also is a company member with the Heartland Actors’ Repertory Theatre, where she has appeared in Much Ado About Nothing and Merchant of Venice.

For Hart, August: Osage County is her second Phoenix show. She starred in The Storytelling Ability Of A Boy last spring.

Hart said she loves turning her character, Jean, into a teenage girl who is relatable and real.

“And it’s exciting to work with another person from Butler, Diane Timmerman, and learn from her as an actress – which is different than learning from her as a professor,” she said.

Director Bryan Fonseca said casting the show was a labor of love.

“The first audition was a read-through of the Act 2 funeral dinner and when I looked on that stage, I saw the sheer amount of their combined years in theatre, the length of the friendships those people represented to me personally and the tremendous amount of talent embodied by those actors,” he said. “Now each rehearsal is like a reunion of sorts, like looking back at the history of the Phoenix.”