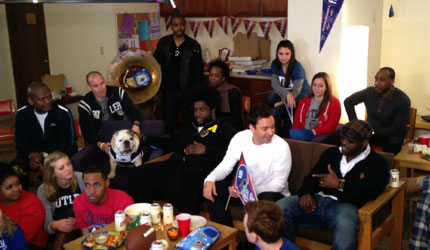 When Butler students heard that Jimmy Fallon, host of Late Night with Jimmy Fallon, would broadcast four shows from Indianapolis during Super Bowl week, they got an idea – let’s get Butler’s live mascot, Blue II, on his show and get Jimmy back to Butler. He performed at Butler’s Clowes Memorial Hall in 2001.

Using social media as the primary distribution vehicle, students created various promotional pieces to get the Late Night host’s attention, including a flash-mob style dance, a “Where’s Jimmy?” riddle contest, a “Thank You” note campaign, and a video of Blue II giving a tiny replica of Fallon a ride around campus on his back.

The result – Fallon and his writer friends from Late Night performed an exclusive comedy show at Butler on Sunday, Jan. 29. Additionally more than 100 students, athletes and cheerleaders, Blue II and costumed mascot, Hink, were involved in Jimmy’s Super Bowl musical open on Feb. 5.

Special thanks to Miller Transportation and Crowne Plaza at Historic Union Station for their assistance to Butler.