One night about five years ago, Tom Jennings ’90 felt pain and irritation in his elbow. So he put one of his daughters’ Tonka Toy wheel on a stick, rolled it across his arm – and invented a piece of equipment to help massage and physical therapists treat their clients and for individuals to use on themselves. 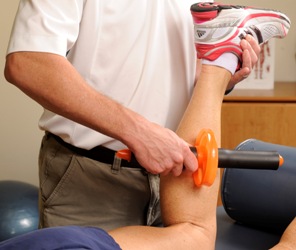 The Therawheel, a two-pound orange and black device built for injury recovery, is a tapered wheel in the middle of a rubber-covered rod. The wheel is used to glide and roll on sore areas of the body. On one end of the rod, there’s a round tip for what’s known as trigger-point therapy – dealing with knotted muscles. On the other end us a flat tip for cross-friction massage. (More information is available at therawheel.com.)

“There’s a huge industry out there that is self-massage for injury recovery,” he said. “What separates us from everybody else is that there are tools that roll, and then there are medical tools that are thousands of dollars that glide. This actually does both.”

Jennings had needed something like the Therawheel for a long time. His background is in athletic training – that’s what he studied at Butler, and that’s what he did for six years with the Indiana Pacers before starting his own performance therapy and fitness business, O’Fit. 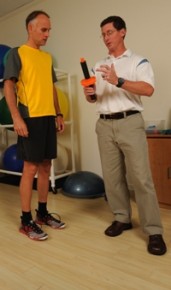 Working on athletes and others associated with the Pacers left his hands sore. A team orthopedic surgeon suggested he “come up with a tool that’s better than all the other tools out there.”

The Therawheel went through several different prototypes that improved its weight, size and design. After trying it out on his clients – and letting other therapists he trusts do the same – Jennings launched the product at a Chicago trade show in February. Those who tried it were impressed.

“This can save my hands,” they told him.

Now he’s taking it to retail outlets (for $49.95) and beginning the marketing process.

“I want to get it in stores where active people shop,” he said. “They need something to treat their muscles.”