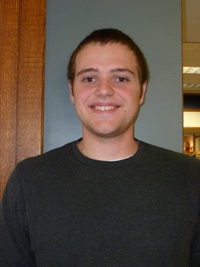 Why did you choose Butler: I was invited to one of the Butler Business Scholars days, and really loved everything I saw. After getting a good look at Butler’s academics, I went to a basketball game and afterwards I was fully sold.

Most memorable academic experience(s) at Butler: My most memorable academic experience at Butler actually occurred while I was still a senior in high school. Butler Business Scholars really stands out to me. It was just so fun. I got to shadow a student, which allowed me to see Butler from the “inside out.” I really learned what it was like to be a Butler student that day.

Activities you’re involved with outside of the classroom: I am involved in Sigma Nu, and was the president this past year. I am also involved with MISTA (Management Information Systems Technology Association), and was president of that last year as well. I’ve also been involved with SABL (Scholars for the Advancement of Business Leadership). Since freshman year I’ve also worked intermittently at the Butler Help Desk.