MFA Program Gets Into Book Publishing

Over the past few years, Butler University has created an MFA in Creative Writing program and an online literary magazine (Booth). Now it has a small press to go with them.Pressgang, the new book publishing affiliate of Butler’s MFA program, released its first title, an anthology called Monsters: A Collection of Literary Sightings, on March 1. 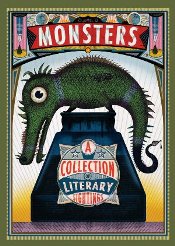 Editor in chief Bryan Furuness, an instructor in Butler’s core curriculum, said the goal is to release one book this year, two in 2013 and eventually ramp up to as many as 12 books of fiction and creative non-fiction each year.By publishing fewer titles than large publishers do, Pressgang will be able to give authors and their books “closer attention for a longer time.”“Closer attention through the editing process, since we’re not distracted by dozens and dozens of other books that we’re editing,” Furuness said. “Closer attention to the marketing process, too, since we can focus on one book at a time, for a longer time.”Furuness first pitched the idea of starting a small press in 2009, just a year after the MFA program got started. But last spring, with the program established and growing, director Andy Levy thought the time was right.Furuness began to build the business infrastructure – setting up marketing, printing and distribution deals, drafting contracts for writers – at the same time he was working with B.J. Hollars, the editor of the Monsters anthology.“It’s been like building a ship as you’re sailing it out – which is really the way I like to do things,” Furuness said. “It makes it more exciting.”Furuness had done an Association of Writers & Writing Programs panel with Hollars called “Monsters, Myths and the Supernatural.” They found they liked similar kinds of stories, and Furuness suggested an anthology of monster stories.“He was in immediately,” Furuness said.Hollars recruited writers including Bonnie Jo Campbell, Benjamin Percy and Aimee Bender, who penned stories about zombies, vampires, mud men and more. The book “represents everything we want to bring to readers: smart, exciting writing and beautiful design,” Furuness said.Furuness said this is a good time for small presses. Books can be printed instantly and individually rather than in mass quantities, and multiple distribution opportunities are available through amazon.com, Barnes & Noble, Powell’s, libraries and small independent bookstores.And small presses typically don’t pay advances. Instead, the authors get a greater royalty rate, which gives them an incentive to partner with the press to market their book.With fewer upfront costs, Pressgang can afford to take chances. Furuness said one of the projects in the pipeline is to pair writers of 400- to 750-word “flash fiction” stories with graphic artists to create literary comics.The goal is this, Furuness said: “We want to be a serious player on the literary scene.”