Professor Watts Is Teaching a New Course? Ride On!

The first-year seminar class, called “All About the Bike,” will cover the history of the bicycle and its technology (“The spoked wheel is not a casual invention,” he said), fashion, safety, touring and commuting by bicycle, bicycling in the urban landscape, the health benefits of cycling and the environmental impact of biking, among many topics. 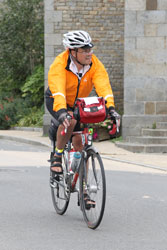 “I wanted to do a different kind of first-year seminar,” said Watts, who specializes in medieval English literature, “and there’s been a challenge to the faculty to come up with courses that also satisfy the community requirement. At the same time, I’ve gotten more serious about cycling.”

The course will not only fulfill the first-year seminar requirement that is mandatory for all Butler students but also the physical well-being and Indianapolis community requirements. Watts and his students will go on group rides, and they’ll be working with Indycog, an advocacy group for Indianapolis bicyclists.

All students must take at least one course that involves a minimum 20 hours of active community engagement.

Watts, 53, has been an avid bicyclist most of his life. He started on his bike delivering newspapers as a 6-year-old and kept that job till he was 14. He grudgingly got his driver’s license at 27. He’s made his 10-mile round-trip commute by bicycle for most his 21 years at Butler, and for the last four years, no matter what the weather, that’s the only mode of transportation he’s used to get to school.

Last year, Watts completed the 1,200-kilometer (approximately 750-mile) Paris-Brest-Paris ride, which takes place every four years. (His blog about the experience can be found at: http://bill-watts.blogspot.com/2011/09/my-paris-brest-paris.html.)

Watts said “All About the Bike” will “equip students with the basic skills they need for college and beyond.:

“It’s a writing class, there’s discussion, reading, and writing organized around a specific topic,” he said. “We’ll be writing and riding.”