For several years, Associate Professor of Anthropology Elise Edwards has been trying to set aside time to write her book on soccer and its relationship to the Japanese economy. 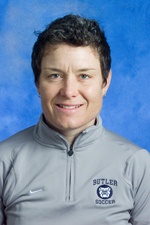 Edwards has been chosen to receive the Henry Luce Fellowship from the School of Advanced Research (SAR) in Santa Fe, N.M. From September 2012 through May 2013, she’ll be on leave from Butler. She will be paid a stipend and provided free housing at SAR for her and her family, office space and, most importantly, time to write.

“This is specifically for people who have all their research done and are ready to write,” she said. “It’s a very quiet, small institute. There are only about six fellows there each year. We’re required to give a few talks, but other than that, our time’s our own to finish our work.”

Her book, Fields for the Future: Soccer, Nation, and Citizens in Japan, will examine how, in the shadow of Japan’s severe recession in the 1990s, coaches, corporate executives and government officials there argued that soccer was useful for modeling and training new sensibilities and skills to help the country regain competitiveness and set it on a path to a more positive future.

Edwards said the book will focus on the Ladies League, a corporate-sponsored semi-professional soccer league formed in the early 1990s. She will draw from coaching treatises, soccer journalism, practice routines, player interviews and official corporate promotional materials about the importance of women’s soccer “to elucidate linkages between soccer and broader socioeconomic changes in Japan at the turn of the millennium.”

Edwards played on the Nikko Securities Dream Ladies in Japan’s women’s soccer league for three seasons after graduating from Stanford University. When she started graduate school at the University of Michigan, she didn’t intend for sports to be her focus, but she wanted to pursue something related to women in Japan and gender issues. An academic adviser encouraged her to maintain her connections to the women’s league, and she returned to Japan as a goalkeeper coach for a professional team in the women’s league while doing the research for her dissertation. (These days, she still coaches goalies for Butler’s women’s soccer team.)

Since Edward joined Butler’s faculty in 2004, the University has twice funded research that allowed her to observe how things have changed in Japan.

And now – finally – she has the time to finish the book.