Where Does Medicine Come From? Check out Butler’s Apothecary Garden 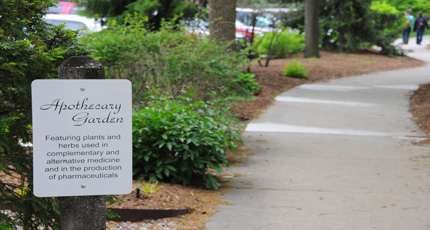 Did you know that a heart stimulant (digoxin) is found in the popular purple flowering plant Digitalis Ianata (Woolly Foxglove), and that the widely used over-the-counter antidepressant, St. John’s Wort, comes from a perennial bearing that same name? These plants are among 100+ plants in Butler’s newly revitalized Apothecary Garden.

“One purpose of the garden is education; to provide a historical record of where medicine started,” said Kimberly Beck, part-time assistant professor for medicinal chemistry. “It’s also about preserving a piece of Butler’s history.”

With little maintenance over the years, plants died and signs faded, so faculty within COPHS came up with an idea to revitalize the garden. With a background in medicinal chemistry, Beck agreed to spearhead the project.

“I really liked the idea,” she said. “It was something I thought would really add to the campus.”

With consultation from Butler biology faculty members Rebecca Dolan and Phil Vallani, Beck was able to identify some plants from the original apothecary garden, like forsythia and peony, which are herbs used in traditional Chinese medicine, as well as new plants including the Madagascar periwinkle, a source of potent anticancer compounds which are pharmaceutical agents used around the world.

The garden also includes some non-medicinal plants, like the beautyberry which produces vibrant purple berries.

A campus-wide ceremony that included a performance by Butler Chorale led by Professor Eric Stark and art installation by Assistant Professor of Art Leah Gauthier, took place on April 10 to officially dedicate the new garden. Prior to the ceremony, Beck and Vallani gave a talk on medicinal plants.

Beck said that while the garden is much improved, there is more to do. “This is the first step and it’s a nice first step,” she said. “We hope to get pharmacy student honor society Rho Chi to maintain the garden for us and, of course, hopefully we can add more medicinal plants in the future.”