Along with lettuce and broccoli, Butler education students planted the seeds of future learning May 2, in a new garden at the Indianapolis Public Schools/Butler University Laboratory School. 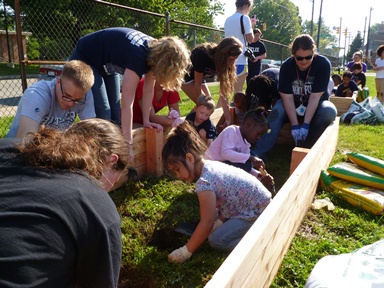 The students planned and funded the garden as a capstone project to their study of leadership styles in the ED 403 “Policy, Leadership and Innovation” course.

They applied for and received a $750 award of garden supplies and plants from the National Gardening Association, as winners in the Midwest Adopt-a-School Garden competition. An additional $2,100 was raised through an on-campus bake sale.

Later in spring, Butler University received a $12,000 grant from Dow Chemical’s Dow Promise program, which will support expansion of the pilot garden into a full edible schoolyard project. COE students and faculty collaborated with Butler Advancement on the Dow grant application. Local Dow scientists will volunteer their time and expertise for the project.

Butler senior Kim Northrup said the garden project was a response to Assistant Professor Catherine Pangan’s challenge to the ED 403 students to select an issue that they could “take a stand on” and address it through concrete actions.

Lab School kindergarten and first grade students worked with the Butler crew on planting day, removing grass from the garden plot north of the school, adding soil to three raised beds and placing vegetable plants, herbs and flowers in neat rows. The small farmers took time to count and admire each earthworm they dug up, then gently released the worms back into the earth.

Three chickens – named Thelma, Louise and Dottie – were also purchased for the garden project. They reside and are laying eggs daily in a schoolyard coop, provided by Mandy Selke and Carly Swift and their Broad Ripple business “Just Pop In.” Selke and Swift are parents of Lab School kindergarteners.

Lab School teacher Marissa Argus ’09 said her students began thinking of a “friendship garden” on their own initiative in January. During a class discussion of friends, Argus said, “One of the kindergarteners, Zek, said, ‘Friendship keeps growing and growing and you have to keep giving and giving.”

This led to the elementary students studying vermicomposting (the use of worm in composting food waste) and how certain plants act as natural pesticides.

Argus said she and other teachers are helping the children understand “the connections between feeding the chickens food scraps from lunch and seeing the chicken’s waste become part of the garden’s fertilizer.”

She hoped to harvest garden produce for a few cooking classes. “That will bring in the science of measuring,” she said. “This is just the beginning.”

Lab School Principal Ron Smith ’88 M.S. ’96 will be the primary keeper of the chickens over the school’s summer break. But, he doesn’t seem to mind.

“It has been a true joy to watch the children take such ownership for both the new garden beds and for the chickens,” Smith said. “I think it is important for children living in cities to gain an understanding of the relationship between the earth, animals and our dinner table.”

The IPS/Butler Lab School is a Reggio-Emilia-inspired, magnet elementary school, located in IPS School 60, 3330 N. Pennsylvania Ave. Butler’s College of Education collaborates with IPS in its curriculum development and operations. All faculty have received education degrees through Butler.