Butler graduating senior Anna January has been selected for a U.S. Student Fulbright award for 2012-2013.

January, an international studies major from Madison, Wis., who also has an individualized major in art and museum studies, will use the award to fund the first year of her art history master’s degree at McGill University in Montreal, Canada, where she has already been accepted for admission. 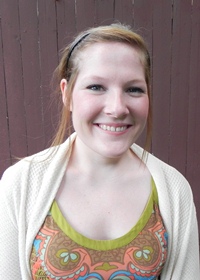 Her research at McGill will focus on French colonial depictions of native North Americans. This work is an extension of a project she pursued at her Smithsonian Institution internship while enrolled in Butler’s Washington, D.C., semester program.

“I am so happy and honored to receive the Fulbright,” January said. “I would have never been able to accomplish this without the amazing professors at Butler. As sad as I am to leave Indianapolis, I am ecstatic for my future at McGill and anxious to see what Montreal has in store.”

January also completed summer internships at the National Gallery of Ireland in Dublin and the Chazen Museum of Art in Madison, Wis. She is currently a research assistant in the Hugh Thomas Miller Rare Book Room at Butler’s Irwin Library. Recently, she presented her research “From Burden to Boxer: The Irish Man in America,” which examines the visual depictions of Irish immigrants and first generation Irish-Americans from the mid-1800s to the early 1900s at Butler’s Undergraduate Research Conference.

“I can think of no student more deserving than Anna for this award,” said Associate Professor of Art History Elizabeth Mix, who has served as January’s adviser. “I am so proud of her. We all are: My ART315 Postmodernism in the Arts class has been awaiting updates as she’s gotten through each cut, and we gave her a standing ovation when she received the announcement. She’s going to an excellent program in a city where she’ll be able to use her French language skills.”

January is Butler’s fourth Student Fulbright recipient. Caleb Hamman is a current Fulbright awardee studying for a master’s degree at Queen’s University in Belfast, Northern Ireland. Adam Weaver is teaching at the Académie de Rouen as part of a program sponsored by the French Ministry of Education. And Terri Rettig received the English Teaching Assistantship to Korea in 2004-2005.

The Fulbright program, sponsored by the U.S. government, is designed to “increase mutual understanding between the people of the United States and the people of other countries.” Through the program, nearly 300,000 participants — chosen for their academic merit and leadership potential — have been given the opportunity to study, teach and conduct research, exchange ideas and contribute to finding solutions to shared international concerns.