If the words “Don’t be skipped over; everyone has the right to fair housing” sound familiar, you might have heard them on your favorite radio station.

They and other students in the Seminar in Recording Industry capstone course have worked with the Indiana Civil Rights Commission (ICRC) over the past two years to write and produce 30-second radio public service announcements discouraging discrimination in housing, education and employment. The ICRC places the PSAs on radio stations throughout the state, some for free, some as paid advertising. 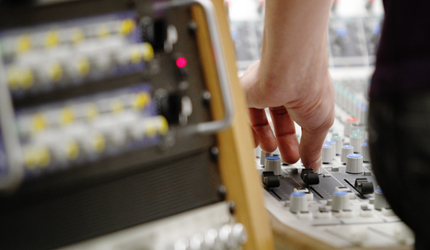 Cutler Armstrong teaches the course in the College of Communication’s Creative Media and Entertainment program. Armstrong said Hyslop and Lehman’s PSAappeals to stations for several reasons.

“It’s very professional sounding as far as the production, writing, music and voice acting,” he said. “Matt and Taylor performed all of those roles. Second, the writing is very clever.”

The PSA simulates the sounds of a person flipping quickly between radio stations, to go along with the tagline, “Don’t be skipped over, everyone has the right to fair housing regardless of race or national origin.”

“Each radio station [in the PSA] is playing music that represents the largest demographics in Indiana,” said Hyslop, who wrote, arranged and performed the music. “One radio station was playing a power ballad, which represents the white population. Another station was playing Mexican mariachi music, to represent theHispanicpopulation, and the last station featured a hip-hop track, to represent the African-American population.”

Lehman came up with the concept and provided percussion and background vocals on some tracks.

“We love partnering with Butler University and having the opportunity to work with students and faculty,” ICRC Executive Director Jamal L. Smith said. “This partnership provides the ICRC with professional quality public service announcements and students with real-world experience.”

“Knowing that these announcements will be used by the Indiana Civil Rights Commission makes this project much more exciting for students and staff,” Armstrong said. “Students come out of the class with something they can play for a potential employer and say, ‘This is something I wrote, performed, played, recorded, mixed and edited, and it aired on the radio.”