Members of Butler’s student advertising club ADrenaline received the Getty Images Award and a $1500 cash prize in the final round of the National Student Advertising Competition (NSAC), sponsored by the American Advertising Federation (AAF) June 2-4 in Austin, Texas. 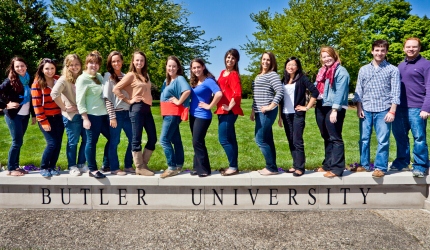 The award recognized Butler for the competition’s best use of imagery in an integrated marketing campaign plans book and presentation to promote Nissan automobiles to young, multicultural consumers.

“This is a huge accomplishment and illustrates that the work Butler strategic communication students create compares to the work produced by some of the best advertising programs in the country,” said Assistant Professor Mark Rademacher. He and Armando Pellerano were co-instructors for the Strategic Communication Program’s Advertising Campaigns course, in which students developed the ADrenaline competition entry.

Students Aaron Fletcher, who served as the creative director for the group, and Michael Kenna, as art director, provided “the primary voices responsible for the winning use of the images,” according to Rademacher.

This was Butler’s third year in a row to represent the AFF’s District 6 (Illinois, Indiana, and Michigan) at nationals, after winning a regional competition first place in April.

“It is rare for teams to go to nationals two years in a row, let alone three,” Rademacher said.

One of 19 college and university student teams competing in the 2012 nationals, Butler finished 17th. A total 145 universities and colleges submitted NSAC entries this year. In 2011, Butler placed fourth nationally.