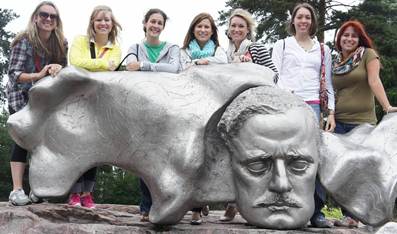 Twenty-one students in the College of Education’s Experiential Program for Preparing School Principals visited Finland and its neighbor Sweden in July, to investigate what drives educational success there. EPPSP faculty Marilyn Sudsberry and Mike Whitman and Professor of Music Tim Brimmer accompanied them.

The group talked with teachers, administrators, university faculty, a former Minister of Finnish Education, and a current member of the countries’ National Board of Education, looking for theories and practices that might work for their own schools.

Both Sweden and Finland uphold “the idealism that everyone deserves a good education,” said Steve Helgeson. “And, if the student does not perform, then they need to be re-taught to get an opportunity to demonstrate what they’ve learned.”

Unlike in the United States, remediation sessions are not long-term and don’t cover all subjects, Briana Vinup said. “Teachers are not blamed for struggles a student or students may be having. It is assumed that the student did not get that certain skill or subject, so extra help is given, and all involved move on. This, in my opinion, prevents kids getting grade levels behind because they are supported before it gets to that.”

Swedish and Finnish children are exposed to multiple languages from the beginning of their education. “Learning multiple languages helps students with their reading and listening comprehension, speaking skills, and English and grammar,” said Megan Schroff.

Whitney Gray was impressed by the flexibility and local control Finland gives classroom teachers. Teachers are allowed to weigh students’ final exams on an individual basis, she said 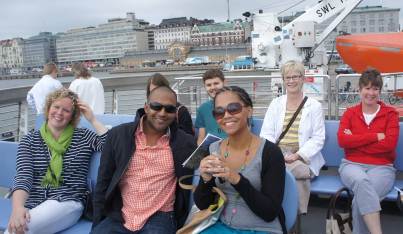 “If a teacher knows a student doesn’t test well, she can make his final test worth 10 percent and his classwork worth 90 percent. At the same time, if another student in the same class aces the test, but never came to class, the teacher can weigh it appropriately.”

“Finland seems to have a more rigorous teacher preparation program requiring a master’s degree while Sweden does not,” said Jena Mobley. “Clearly, stronger preparation results in more successful teachers, which in turn leads to a more respected profession.”

The governments of Finland and Sweden provide extensive government underwriting not just for education, but also for child care, student nutrition, housing and healthcare.

“It can’t be denied that Finland and Sweden look out for their people,” said Geier. “Both countries realize that the future and well-being of the country is based on the human capital, and it is the government’s duty to serve and ensure [children’s] development inside and outside of school.”

“They care for the child before lessons and after lessons, which has to help create the sense of community needed to be successful,” said Joe Bowman.

“Students in America who are taking this journey alone do not have that support readily available,” said Anthony Tharp. “What can we do different to provide a stronger equality in our education system so all can achieve regardless of income level?”

Sweden and Finland graduate 90 percent of their secondary students, Tharp said, as compared to 40 percent in the United States. “Would dropout rates be much lower,” he asked, “if we could create a stronger support system for all?”

The Crawfordsville, Ind., Journal Review wrote about the trip in this interview with Jonathan Guthrie and Meredith Keedy. More student comments can be viewed in the trip blog.

Tagged with → COE • EPPSP • Finland and Sweden
Please share it!