Kyle Inskeep ’12 has been named the recipient of NBC News’ Tim Russert Fellowship, earning him a one-year salaried position in the network’s Washington, D.C., bureau. 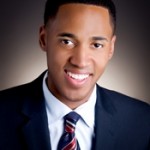 Inskeep will start with Meet the Press, then join NBC’s political team and, finally, work on general assignments.

“To work with them is the opportunity of a lifetime, especially in a presidential election year,” said Inskeep, who starts Sept. 4. “Just to have the opportunity to rub elbows with the D.C. political elite and get mentored by the NBC News staff is amazing.”

“It was more of a conversation,” said Inskeep, a Columbus, Ind., native who majored in electronic journalism in Butler’s Eugene S. Pulliam School of Journalism, part of the College of Communication. “We were talking about political journalism – what I thought was right with it and what I thought was wrong with it. And since it was more of a conversation, I got to hear their views on things. It was so insightful for me, to get to learn from them. And it wasn’t at all intimidating because they were so welcoming and so warm.”

Then he sat in on the staff editorial meeting, which included a discussion with Kelly O’Donnell, the NBC congressional correspondent. Just prior to his arrival, the staff had held a conference call with anchorman Brian Williams.

“I’m sitting there thinking, ‘This is not real life. This just can’t be,’” Inskeep said. “It was an amazing day.”

Two days later, they called and offered him the position.

Inskeep said he admired Russert, the long-time moderator of Meet the Press, who died in 2008. He remembers watching Russert use a white board during the 2000 election to break down the electoral vote count in the Bush-Gore presidential election.

“He was always so well prepared,” Inskeep said. “Even as a child, I could tell how well prepared he was whenever he was on camera. That’s something I want to take away from this fellowship – how to be prepared and how to ask the right questions and be an engaging interviewer and reporter.”

Scott Bridge, an instructor in Butler’s electronic journalism program, said Inskeep has all the tools to be a successful broadcast journalist.

“Kyle is a great example of the type of journalism student in Butler’s program,” he said. “He can write, shoot and edit his own video stories and write for print and the web too. Combine those multimedia skills with the critical thinking skills from a liberal arts education and Kyle is ready to work in any newsroom.”

Inskeep, who as a senior earned a fellowship from the the Walter Cronkite School of Journalism and Mass Communication at Arizona State University, said he hopes to follow in Russert’s footsteps.

“I want to have an impact on the world of journalism in whatever form it takes,” he said. “At this point, I’m keeping all my options open, but I would love to work for the network long term.”