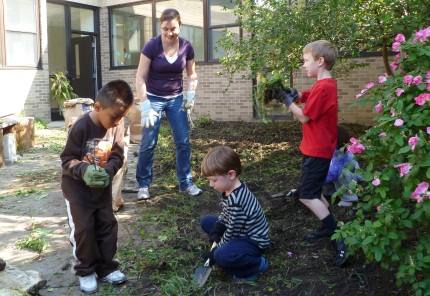 The “edible schoolyard” project was funded through a $12,000 Dow Promise Grant to Butler. Indianapolis-based Dow AgroSciences awarded the grant with support from The Dow Chemical Foundation. COE students developed the grant proposal and the initial Lab School gardens last spring as part of a “Leadership in Education” course.

Trisha Eberle Borowicz organized the event for her co-workers in the Dow AgroSciences Trait Genetics and Technology group.  “The school had all the materials ready, and parent-volunteers were at each station when we arrived so we got a lot done,” said Borowicz, a 2002 Butler graduate in chemistry.

“This project is so cool. It gives Lab School students a place to learn science outside the classroom and in a real-life way,” she said. “I love the idea that Butler has collaborated with IPS and Dow AgroSciences in support of the Lab School.”

Actively experimenting with plants and soil is a great way for Lab School’s K-2 students to foster a love of science, Borowicz said. “I hope more schools have gardens like this. Dow AgroSciences needs young people who are interested in science and technology.”

Volunteer Teresa Fruits said the Dow AgroSciences Trait Genetics and Technology group has completed service projects at other Indianapolis public schools, but the Lab School event stood out for her because of the opportunity to work with its students. “The kids told us, We’re so thankful for you giving us these plants and this garden,” she said.

Fruits wished her elementary school had featured the type of hands-on learning the edible schoolyard offers. “Lab School appears to have set up an environment based on the children’s curiosity and interests,” she said. “Here, teaching is constructed around the level where the children are.”

Marla Olthof, author of Hollyhocks and Honeybees: Garden Projects for Young Children, photographed the planting and building activity so she can feature the Lab School edible schoolyard in her next book, to be published in 2014.

“This is the most elaborate school garden project I’ve ever seen,” Olthof said. “I’m impressed by Dow AgroSciences’ collaboration with ISP and Butler, and that Butler students began the project by applying for the grant from The Dow Chemical Foundation.”