By virtue of living 92 years and being a diehard basketball and Bulldogs fan, 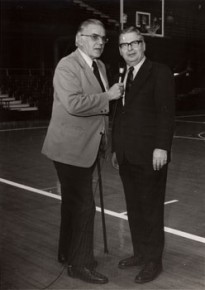 spent more time in Hinkle Fieldhouse than most folks.

Starting as a Manual High School student in Indianapolis, Herb attended nearly 70 consecutive Indiana state high school basketball final games. Several were in Hinkle, which hosted the finals  from 1928-1971. A high school referee, he officiated many games at the Fieldhouse, including the 1955 and 1956 basketball state final. He also worked there as a color commentator with his close friend, sportscaster Tom Carnegie. In 1970, Herb authored what is considered the definitive Indiana basketball book, Hoosier Hysteria.

While earning his bachelor’s degree in education from Butler, Herb played basketball in Hinkle. He and Freda Marvel, the classmate he later married, both graduated in 1942; Herb earned his Master’s of Education from Butler in 1945.

He then worked for the University for 38 years, including 25 years as dean of men, and many seasons as an assistant coach and assistant athletic director under Tony Hinkle.

“I basically grew up at Butler and the Fieldhouse,” Herb’s daughter Sandy Schwomeyer Lamb ’68 of Morgantown said. “Daddy would take me over to the fieldhouse on weekends.

She recalled the fieldhouse’s once-broad hallways, which will regain their spaciousness during the remodeling project. She said she rode her bike and roller skated in the corridors. During games, she’d twirl batons there with the daughter of Butler band director Charles Henzie.

“When the Halftime Honeys [the band’s dance corps] came out, we’d run in to watch them,” Sandy said.

When Lamb was in high school, coming to Hinkle for state basketball tournaments was a special ritual. “We got out of school on a Friday, and all went into that huge gym,” she said. “It was so neat to look around the fieldhouse. You could see where each school was sitting because that section would be full of their school colors.”

She also remembers “the malt man,” a refreshment vendor who, for a quarter, would toss malted milks to customers high up in Hinkle’s grandstands, never missing the waiting hands.

As dean, Herb liked showing support for student-athletes by attending their games. That habit continued in retirement, even when he got around with a walker. “He went to every home game,” Sandy said. “People stood in line to take him.”

After her father’s death on March 11, Sandy’s family heard from former students who appreciated how Dean Schwomeyer encouraged them. “Many of them said, ‘If it hadn’t been for your dad, I couldn’t have gone to Butler; I couldn’t have graduated.'” she said. “Dad would get jobs and financial aid to help students keep going. Through the years, they stayed friends.”

Herb seemed to have so many Butler friends that, years ago, Sandy jokingly told him, “Daddy, when you die, we’re going to have to rent the fieldhouse for your calling.” He warned her not to “do something crazy like that.”

When Herb did pass away, Sandy phoned Butler Athletic Director Barry Collier to inform him. Collier inquired what Butler could do for the Schwomeyer family. Sandy asked if Herb’s calling could be held in the fieldhouse. After some quick checking, Collier called her back.

“He said, ‘Butler would be honored,’ ” said Sandy.

So, on March 14, Herb Schwomeyer’s casket was placed at center court in Hinkle. A chair decorated with blue and white balloons and photos sat in Herb’s usual place on the sidelines.

“Brad [Coach Stevens] stayed with us for a while. Barry greeted everyone in the visitors’ line,” Sandy said.

Her only concern that day was what a certain former coach might think about all those people walking on Hinkle’s playing floor. “When Daddy was working with Mr. Hinkle, people did NOT step on the floor,” she said. “I looked up toward the scoreboard, and I said, ‘Please, Mr. Hinkle, don’t be mad at our dad. It was all my fault.’ “

Herb, on the other hand, would have been perfectly at home. “He just loved Butler, everything about it,” Sandy said. “He cared about the kids.”