The Indiana Pharmacists Alliance has honored Butler Pharm.D. candidate Tyler Hensley ’13 with its Outstanding Student of the Year award for 2012. The award recognizes a student who has been actively involved in association activities and has helped to promote the advancement of pharmacy. 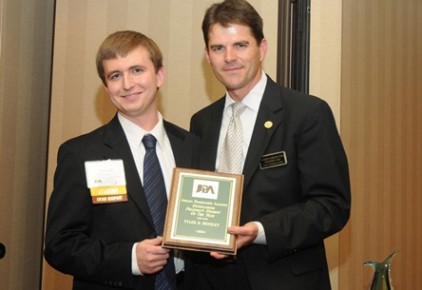 Hensley, from Versailles, Ind., came to Butler as a Lilly Scholar. He is a past-director of the Butler Community Health Screening Program, for which he helped organize a large-scale, student-run health fair for the Butler-Tarkington community.

He has served as treasurer and president for the Butler Student Association of Pharmacy, and alumni liaison and vice president for the Phi Delta Chi pharmaceutical fraternity chapter. He volunteers through Phi Delta Chi at the Ronald McDonald House of Indianapolis, working with the school visits committee to educate children about poison control and adolescents about careers in pharmacy. He served two terms as the student adviser to the College of Pharmacy and Health Sciences (COPHS) Curriculum Committee and was an inaugural student member of the Indiana Academy of Community Pharmacists Executive Board.