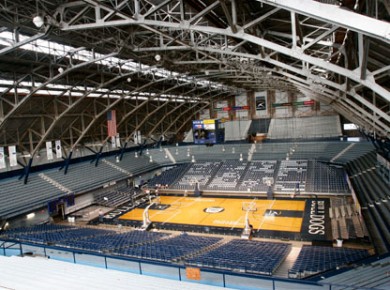 Butler has already secured over $11 million in campaign gifts and pledges, which has allowed the University to begin repairs to the fieldhouse’s exterior this past summer. Work included tuck-pointing 282,000 bricks, replacing more than 9,700 windowpanes with energy-efficient glass, and updating utilities.

Interior improvements are planned in 2013-2014. The site of a former natatorium will be reconstructed to house a new student-athlete academic center, strength and conditioning room, sports medicine center, and coaching/administration offices. Locker rooms will be remodeled for several sports. Fan-friendly additions to Hinkle’s arena will include a scoreboard with video capability, more chair-back seating, and additional restrooms. View renovation plans at http://youtu.be/pzmnj0KqNKY.

Hinkle’s West Gym practice facility will be renamed the Efroymson Family Gym, recognizing a $1 million gift from the Efroymson Family Fund. Other major gifts have been received from the estate of baseball alumnus Rex Blacker ’40; from alumni T. Scott ’85 and Debra ’83 Law and their company Zotec Partners; St. Vincent Health; and the federal “Save America’s Treasures” program.

“In renovating our beloved Fieldhouse, we will honor its place as a state and national landmark,” Danko said, “and ensure that Hinkle will serve student-athletes and all Hoosiers for generations to come.”

Opened in 1928 as the Butler Fieldhouse, the 15,000-seat arena reigned as the nation’s largest basketball arena for the next 20 years. (Later reconfigured, the arena now seats 10,000.)

Community leaders contributed $750,000 for the fieldhouse’s construction, under the agreement that the Indiana High School Athletic Association (IHSAA) basketball championships would be staged there. That tradition continued from 1928 to 1971.

Hinkle Fieldhouse was named to the National Register of Historic Places in 1983, and declared a National Historic Landmark in 1987.

“No other facility in Indiana has accommodated so many people over so long a period and for so many different purposes,” Butler Athletic Director and Vice President Barry Collier said.

“Butler and Indiana’s history have been made in the fieldhouse. We hope everyone who shares and appreciates that history will support the campaign.”

Contributions may be made at www.hinklecampaign.com.

Butler will celebrate Hoosier Hysteria Day at Hinkle Dec. 22, inviting all former IHSAA tournament players, coaches, officials, and participants to be honored during a men’s basketball game against the University of Evansville.