It’s a first for Ian Anderson, an instructor for Recording Industry Studies (RIS) at Butler: A song from an album he produced a few years ago has been featured on three television shows this year. 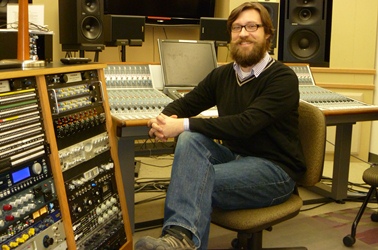 The promotional firm RED Music notified Anderson that the song “Protecting God” by Eastern Block played during episodes of Jane By Design (ABC Family Network), One Tree Hill (CW Network), and Teen Mom (MTV), which aired between January and July.

The song is part of the album Past Palace, which Anderson produced and engineered for an independent label in 2008-2009. He described the song as “up-tempo indie rock” inspired by a news story about the sale of a bulletproof car once used by Pope Benedict XVI.

Anderson, who teaches the technical/creative side of audio production, said this is the first time he’s been involved with a recording later picked up for television. He recalled contributing to the song’s arrangement, “which is typical for producers now,” he said.

An engineer-producer’s work, he said, “no longer focuses on just on the techniques of placing microphones. You have to develop your musical skills, too.”

Since Anderson joined the College of Communication’s Creative Media & Entertainment program,  in fall semester 2011, he and Armstrong have instituted several program changes aimed at challenging the growing number of RIS majors, now close to 70.

“We’ve raised the bar, made it more difficult, and incorporated more theory, physics, and math,” he said. “We added some $50,000 in new equipment last spring and made improvements in our smaller studio—new wiring and a more ergonomic layout.”

In spring semester 2013, Anderson and Armstrong will introduce tandem senior-level capstone courses in which students will contract and produce an actual album for a label. (The artist has not yet been chosen.)