Hinkle Fieldhouse Video Room to Be Named After Gordon Hayward 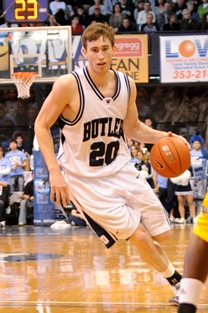 “The Gordon Hayward Men’s Basketball Video Room will be equipped with state-of-the-art multimedia equipment and tiered theater seating, giving the Bulldogs an added edge in facilities never seen before in Hinkle,” said Butler Athletic Director Barry Collier. “The video room is part of the planned men’s basketball suite, which will include revamped locker rooms, a conference room, and coaches’ offices.”

Now in his third season with the NBA’s Utah Jazz, Hayward averaged 14.4 points and 7.4 rebounds in two seasons at Butler. The Bulldogs posted a 59-11 record during his tenure, highlighted by the university’s first appearance in the NCAA national championship game.

“We are thrilled Gordon has decided to support Butler University, the basketball program, and the renovation of Hinkle Fieldhouse,” Collier said. “As an Academic All-American, he left a legacy with his play on the court and in the classroom. This gift and commitment to the Hinkle campaign shows that he appreciates Butler just as we appreciate him.”

Launched by Butler in November, the campaign is seeking $16 million to preserve and maintain the Fieldhouse’s historic structure and to make improvements that benefit Butler’s student-athletes and enhance the fan experience for Hinkle spectators.

Men’s Basketball Coach Brad Stevens said Hayward has always demonstrated a commitment “to being the best teammate he can be.”

“His eagerness to donate to The Campaign for Hinkle Fieldhouse and ultimately put his name on our video room is awesome,” Stevens said. “We are not only proud of the success he has had in his young NBA career, but thankful for how he represents Butler every day.”

A Brownsburg, Ind., native, Hayward was a Horizon League player of the year and 2010 NCAA West Regional Most Outstanding Player before declaring for the 2010 NBA Draft. He was picked ninth by the Utah Jazz. In between his two seasons at Butler, he and teammate Shelvin Mack led the United States U-19 World Championship team to a gold medal in New Zealand.