The Sept. 11, 2001, attacks on the United States rocked the life of R. Ann O’Connor, an American working at a private Saudi Arabian hospital. 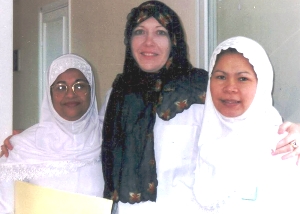 Now an adjunct professor in Butler’s College of Communication, O’Connor has written a memoir of those challenging days, Being Madam Fatima (Southern Girl Press, January 2013).

O’Connor spent eight years in the southwestern Saudi Arabia region of Assir, home to seven of the alleged 9/11 terrorists. During much of that time, she was director of nursing at the 150-bed Abha Private Hospital, where the staff addressed her as “Madam Fatima.”

(Female nursing directors in Saudi Arabia are usually referred to as “madams,” according to O’Connor. The title “Fatima” shows respect, as it is the revered name of the Prophet Mohammed’s daughter.)

She said her hospital work made her one of the most publically visible U.S. citizens in the isolated region.

Immediately after the attacks, she wrote, she became “the target of pent-up anger and hatred, and … reactionary comments from co-workers and other Arabs.”

Although most Saudis supported her, O’Connor said, “Some people didn’t appreciate me for my passport.

“I was proud of being American. There was a lot of retaliation again Westerners then.”

She hopes her book will encourage readers to not give up in difficult circumstances, and to not “judge others by what we see in media. Arabs are a misunderstood culture.”

O’Connor returned to the United States in 2006, ready for a new career that would capitalize on her administrative and cross-cultural experiences. She earned a master’s degree in organizational communication from Southeastern University in New Orleans, and taught there for five years.

She also trained U.S. military troops on cultural understanding, helping them bridge a communication gap soldiers often experience during their first deployments to Iraq or Afghanistan. This service to country earned her the Jefferson Award in 2009.

O’Connor bumped up against more history-making headlines in 2010, when the BP oil spill squeezed the Gulf Coast economy. Her university job was eliminated, and she moved home to Indianapolis.

O’Connor said her Butler students appreciate her personal anecdotes about communication challenges in leading a large workforce or dealing with clients from different cultures.

“I enjoy seeing the ‘Aha!’ moment with students,” she said.