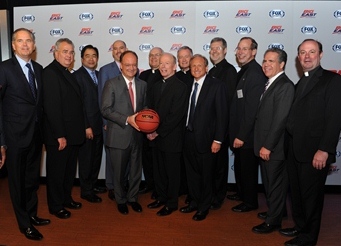 “Joining the Big East is an unprecedented opportunity for Butler and represents an ideal fit for us—academically, athletically, and geographically,” said President Danko.

Joining the Big East will further enhance Butler’s national visibility, which soared following the men’s basketball team’s back-to-back Final Four runs in 2010 and 2011. “Butler’s increased national prominence will create new opportunities not only for student-athletes,” stated Danko, “but for our entire student body and for our alumni, while increasing the value of a Butler degree.”

The Butler Bulldogs’ football team will remain in the Pioneer League, while other sports will begin their Big East competition in the fall.

“This new opportunity to compete against Big East universities—which have a rich tradition of excellence across a wide range of sports—will enhance the Butler experience for all our student-athletes,” said Vice President and Director of Athletics Barry Collier.

The conference change comes a year after Butler’s move from the Horizon League to Atlantic 10 Conference. “The A-10, like the Horizon League, is an outstanding conference, and we were honored to be a member,” Danko added. “After in-depth deliberations and analyses, we determined that joining the Big East was the right thing to do for our students and our institution, regardless of the timing of past conference transitions.”

The Bulldogs have made appearances in NCAA National Championship Tournaments in men’s and women’s basketball, men’s soccer, volleyball, men’s cross country, lacrosse, and baseball, and over the past decade, Butler teams have captured 29 conference championships.