The New York Times bestselling author John Green will deliver the Commencement speech at Butler University’s May 2013 graduation ceremonies, to be held at 10 a.m. May 11 in Hinkle Fieldhouse. More than 800 students are expected to receive their diplomas. 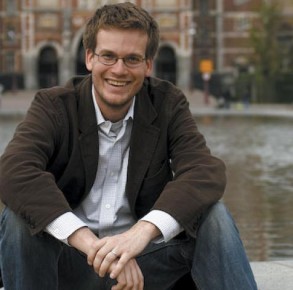 Green’s latest novel, The Fault in Our Stars, was TIME magazine’s No. 1 Fiction Book of the Year in 2012 and will soon be made into a film by Twentieth Century Fox. Green’s other bestselling books include Looking for Alaska, An Abundance of Katherines, and Paper Towns.

He was the 2006 recipient of the Michael L. Printz Award, the 2009 Edgar Award, and has twice been a finalist for the Los Angeles Times Book Prize. Green’s books, written primarily for a young-adult audience, have been published in more than a dozen languages.

In addition to his literary success, Green and his brother, Hank, have become cultural icons through VlogBrothers, an exchange of YouTube videoblogs between the two since 2007. VlogBrothers videos have been viewed more than 200 million times, and the channel is one of the most popular in the history of online video.

Green’s cultural popularity is further reflected by his more than 1.4 million Twitter followers, his sold-out performance of “An Evening of Awesome” at Carnegie Hall in January 2013, and a recent appearance on The Late Late Show with Craig Ferguson.

Green is a graduate of Kenyon College, where he earned his bachelor of art’s degree with a double major in English and religious studies.

In honor of his role as Butler’s Commencement speaker, Green will be awarded an honorary doctorate of letters.