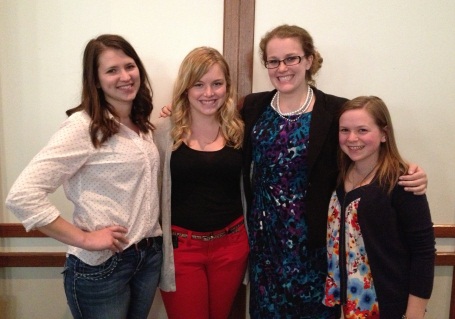 Blue I was one of three PRSSA teams Butler fielded this year, and the only team from an Indiana school to receive national recognition in the competition. This is the second consecutive year that Butler students earned honorable mention.

“We are proud of the winning team and appreciate all three Butler student teams’ work to prevent youth bullying in our community,” said Bob Schultz, MA, APR, Butler’s PRSSA chapter professional adviser and the professor for the competition course.

The 2013 Bateman Competition, PRSSA’s premier national competition, drew 68 entries from across the country. Three teams earned top awards, and 16 additional teams, including Blue I, were selected for honorable mention.

The Bateman Competition provides opportunities for strategic communication students to apply classroom education and internship experiences to create and implement a full public relations campaign on a particular advocacy issue.

This year’s entries focused on increasing awareness of the serious consequences of youth bullying (bullying between the ages of 10-19). Students created campaigns to inform children, teens, parents, and other key audiences of steps to prevent and report bullying.

After researching the issue, the Blue I team identified Carmel Clay Parks & Recreation as a client sponsor, and worked with the department’s Extended School Enrichment Program on an anti-bullying campaign. Led by Cromleigh, the team developed a curriculum, promoted it, presented the curriculum in the classroom, and implemented and assessed all aspects of the comprehensive PR campaign.

“One aspect of the campaign that I think really made it stand out was the use of messages that truly resonated with both adult audiences and young students,” Chopp said. “In turn, these messages raised awareness in ways that we could quantify to show the impact that the campaign had.”

Blue III team members were Camryn Walton (team leader), Jordan Gill, Katy Myers, and Ali Hendricks. They worked with the Girl Scouts of Central Indiana and their “BFF: Be A Friend First” program.