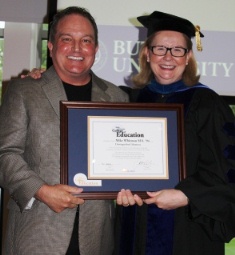 As a building level administrator for two of the district’s elementary schools, he created building-wide climates that emphasized the social, emotional, and academic needs of students.

His nomination stated that Whitman, a long-time administrator in several districts, “faced many pressures, but he never pressured his teachers. Instead, he worked to nurture them so that they could nurture their students.”

Linda Boone retired in 2010 after teaching second and third graders for 18 years in the Fairfax County Public Schools, Centreville, Va. She often mentored fellow teachers during her career and was honored as Wal-Mart Fairfax County Teacher of the Year 2001-2002. She previously taught in Warren Township, Indianapolis (1970-1976) and has served on the College of Education’s Board of Visitors (2007-2012).

She met her future husband Canfield “Buddy” Boone ’71 at Butler; both majored in education. He was serving as a U.S. Army lieutenant colonel in the Pentagon on Sept. 11, 2001, when he was killed during the terrorist attack on the building. Linda and her family established a memorial scholarship in his honor to benefit a Butler education student.

Laura Ganus Tuthill is a senior instructor with the College of Education at the University of Colorado in Colorado Springs. She coordinates the Gifted & Talented Education program, and serves on the university grant leadership team and as a classroom coach for teachers. Under a Colorado Department of Education grant, Tuthill helps 55 southern Colorado teachers improve literacy among English language learners in preschool through Grade 3.

Previously, Tuthill was chair and an assistant professor of teacher education at Western State Colorado University and an instructor/lecturer for Adams State University, Colorado Mountain College, and Metropolitan State University of Denver. Tuthill received the 2008 President’s Volunteer Service Award from the U.S. President’s Council on Service and Civic Participation.

Colleen Moran has been superintendent of North Montgomery School Corp., based in Crawfordsville, Ind., since May 2010. She previously served as the district’s director of curriculum (2001-2004) and assistant superintendent (2004-2010).

A respected adjunct instructor in Butler’s Experiential Program for Preparing School Principals (EPPSP), Moran has placed several Butler student teachers in her district and supported NMSC staff and principals in EPPSP. She previously served in the Indiana Department of Education and Western Boone Schools.

Marilee Updike has been an Indianapolis Public Schools teacher and program director for nearly 40 years, and is an impassioned advocate for equitable education access and outcomes for English language learners (ELL). She has supervised and supported many English as Second Language (ESL) teachers.

Updike coauthored the Indiana English Language Proficiency Standards and has testified before the Indiana House and Senate on ELL-related bills, helping legislators understand the impact of their decisions on undocumented students. U.S. senators Julia Carson and Andre Carson, Department of Education staffers, and district ESL directors have sought her policy advice.

She has served on the boards of such organizations as the Hispanic Education Center, Indianapolis Mayor’s Commission on Latino Affairs Indiana ELL Advisory Council, Indiana Minority Health Coalition, and the Indiana Commission on Hispanic/Latino Affairs.