Bestselling author John Green told the 814 members of Butler University’s Class of 2013 that they are about to take the hero’s journey—not from weakness to strength, as the story is so often told, but from strength to weakness. 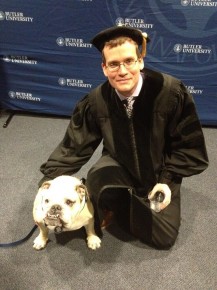 “You will go from being the best-informed, most engaged students at one of the finest universities around to being, if you are lucky, the person who brings coffee to people,” he told the graduates, their family, friends, professors and others on May 11 at Hinkle Fieldhouse. “Whether you’re a basketball player or a pharmacist or a software designer, you are about to be a rookie.”

But that’s OK, Green said, because “in learning how to be a nobody, you will learn how not to be a jerk. And for the rest of your life, if you are able to remember your hero’s journey from college grad to underling, you will be less of a jerk. You will tip well. You will empathize. You will be a mentor, and a generous one.”

In short, he said, you will become one of the people who change lives.

“Relatively few of them are publicly celebrated,” he said. “We don’t think of the money they had, but of their generosity. We don’t think of how beautiful or how powerful they were, but how willing they were to sacrifice for us. So willing, at times, that we might not have noticed they were making sacrifices.”

Green, author of “The Fault in Our Stars,” also offered a list of ways—some funny, some serious—to live a good life. He advised:

-Don’t worry too much about your lawn.

-Despite what you’ve heard, it’s better to fade away than it is to burn out. “Always fade away,” he said.

-Keep reading. “Specifically read my books, ideally in hardcover,” he joked, then added: “Education isn’t really about grades or getting a job; it’s primarily about becoming a more aware and engaged observer of the universe. And if that ends with college, you’re rather wasting your one and only known chance at consciousness.”

-Old people fear their ignorance of the Internet. Use that to your advantage.

-Try not to worry too much about what you’re going to do with your life. You are already doing what you are going to do.

-There are many more jobs than you have ever heard of. Your dream job might not even exist yet. “If you had told college-graduate-me that I would become a professional YouTuber, I would have been like, ‘That doesn’t seem like a word,’” said Green, whose YouTube videos have been viewed more than 200 million times.

-Finally, be vigilant in the struggle toward empathy. “The gift and challenge of your Butler education is to see others as they see themselves, to grapple meaningfully with this cruel and crazy and beautiful world.”

Green posted the full text of his remarks here.

Green and Martha Mitchell ’45, M.S. ’60 received honorary degrees. Education Professor Arthur Hochman honored Mitchell for her long career as a teacher and administrator in the Indianapolis Public Schools. She “positively impacts the world and does not simply exist in it,” he said.

President James M. Danko asked the graduates to exemplify the Butler Way and “serve family, friends, and communities as you have here at Butler.” Faculty speaker Catherine Pangan, the Richard Guyer Chair in the College of Education and a former fourth-grade teacher, offered her advice to the graduates in the form of an interactive fairy tale about students who, while on a quest for “the real world,” come to find out that they’re already in the real world—and doing just fine.

Along with the 814 graduates who walked across the stage to receive a diploma, retired mascot Blue II trotted across—and received a bone.