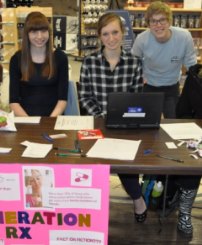 A video created by Butler students to increase awareness of prescription drug abuse by college-age individuals has won first prize in the National Council on Patient Information and Education (NCPIE) “Pass it forward” video challenge.

The federal Substance Abuse and Mental Health Administration will feature “The Rx Trap” at a September event in Washington, D.C., kicking off the observance of National Recovery Month. The video will also be showcased on multiple NCPIE websites.

Shot on the Butler campus, the video shows a fictional female student trying to deal with the stresses of college life by using prescription drugs. Blum’s sister Jessica portrayed the character, who records her increasing despair in emails and tweets to her grandmother.

Kyrouac said she and the other producers wanted to base the video’s dialogue in a social media exchange, something its intended audience could relate to.

“As our ideas evolved, we decided a two-minute video would be better suited to a one-way conversation, as it would be easier to follow,” she said.

The students developed the video as a fourth year pharmacy capstone project. At the same time, all four were busy gaining pharmacy experience in required professional rotations—rotations that took Kyrouac and Lyu not just off campus, but out of state.

Consequently, she said, “the video was made through splicing of different media. Sora and I recorded our voices remotely from South Dakota, and Andrew and Katie Jane filmed in Indianapolis. Andrew’s video-making vision and editing talent really helped the video stand out.”

One of Gonzales’ cousins, an amateur music producer in St. Louis, provided an original score for the video.

“The students were presented this opportunity and really make it their own from start to finish,” Sprunger said. “Sam and I will continue to work with them on the P-4 project in the coming academic year. We will incorporate the video as well as increased education to BU students and the community.”

The video was  part of a larger initiative to introduce the Generation Rx program at Butler. Started at The Ohio State University 2007, the program educates college and high school students about the risks of prescription medication misuse. Samantha Christie, another pharmacy student, founded Butler’s Generation Rx chapter last year.

One of the chief risks involves individuals who take medication that was prescribed for someone else, Gonzales said.

“Prescription medications are meant for proper use by a sole user. It can be very dangerous to take medications that are not meant for you,” he said. “Our Generation Rx chapter will actively promote this concept.”

“Dr. Gurevitz has done a lot of work on the issue of substance abuse at Butler,” Blum said. “He has been a huge part of the Generation Rx Initiative, and also took COPHS students to the Utah School of Alcohol and Substance Abuse the last few summers.”