Butler Puts a Piece of the RCA Dome to Good Use

The RCA Dome is long gone, but its pieces are being put to good use at the CUE Farm at Butler University.

As part of a grant from the Nina Mason Pulliam Charitable Trust, the University has built a covered pavilion using fabric from the RCA Dome roof and recycled/re-purposed materials from other sources. 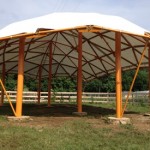 In all, 80-85 percent of the structure is made of reused material.

“It’s exciting to have completed a project with the amount of reused material that’s in it,” said Tim Carter, director of Butler’s Center for Urban Ecology (CUE), which oversees the campus farm. “This can serve as a demonstration for how simple structures don’t need to consume additional resources. Hopefully, this will be a model for others to emulate.”

The pavilion will be used as a gathering spot for people coming to the campus farm, those using the intramural fields, as a distribution point to sell produce from the farm, and for educational classes.

Among the recycled/reused items in the structure, located west of campus at the University’s athletic fields:

-The entire roof is architectural fabric salvaged by People for Urban Progress from the former RCA Dome, which was torn down in 2008.

-The concrete used for the foundation contain 20 percent fly ash, a combustion waste product created typically from the burning of coal in power generation and steel production.

-Wood members used in the structure are reclaimed timber framing from a former building. The members were re-fabricated for the project.

-The floor will be reclaimed bricks from a prior construction project on Butler’s campus.

Plans for the pavilion date back to 2011, when the Center for Urban Ecology was awarded a Nina Mason Pulliam Charitable Trust grant to expand both the physical space and the educational programming associated with the campus farm.

The Center for Urban Ecology, which runs the farm, exists to explore, steward, and enhance urban ecosystems with a vision of becoming a national leader in the study and practice of urban ecology. It was the desire of the CUE to build a pavilion for the farm that would not only serve the farm’s day-to-day working needs but to have a shelter made up of reclaimed material, Carter said.

Carter partnered with People for Urban Progress to develop the idea for the pavilion utilizing the RCA Dome material. Working with local architect Paul Puzzello, the roof design was based on the geometry of the vesica, a shape created by the intersection of two circles with the same diameter, seen in medieval art, architecture, and crop circles.