After a week filled with madness—including 12 killed at the Washington Navy Yard, 13 shot in a Chicago park, and an Indianapolis police officer gunned down—Butler University took some time on Friday, Sept. 20, to emphasize peace. 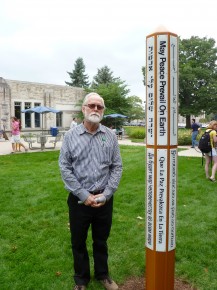 Craig Auchter at the Peace Pole

The University unveiled a Peace Pole—a 7-foot, octagonal, red cedar pole containing the words “May Peace Prevail on Earth” in 16 languages—in the grassy plaza between Starbucks and Jordan Hall.

“The Butler Peace Pole will serve as a silent symbol of the University’s commitment to peace and a reminder of the importance of peace in our daily lives,” Professor Craig Auchter, director of the Peace and Conflict Studies (PACS) program, told about 100 people assembled for the unveiling.

Auchter said that last year, PACS students Kelly Hamman and Emily VanTyle and some of the PACS faculty explored the possibility of bringing the Peace Pole to Butler. The idea gained support within the College of Liberal Arts and Sciences and the University, and President Jim Danko approved the site. The student diversity organization R.E.A.C.H. provided the funding for the pole.

Hamman ’13, who helped bring the Peace Pole to Butler, told the crowd that peace “can be as simple as opening a door for someone who looks like they’re a little bit troubled.” And she reminded them that there are people all over the world working toward peace in all its forms.

The Peace Pole is one of 200,000 planted around the globe since 1955. The idea was originated by a philosopher-teacher in post-World War II Japan. By planting a Peace Pole, organizations link with other groups all over the world who have planted theirs in the same spirit of peace.

“As we prepare to leave this place,” Auchter said at the end of the ceremony, “let us remember the wise counsel of Eleanor Roosevelt, who said, ‘It isn’t enough to talk about peace. One must believe in it. One must work for it.’”