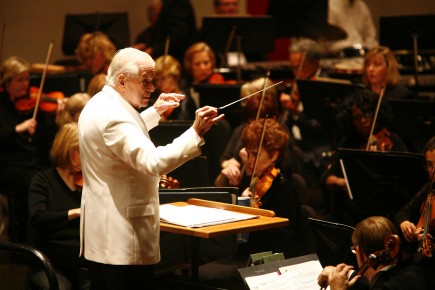 “Jackson Wiley was the in-house whirling dervish in music at Butler,” said James Briscoe, professor of historical musicology. “And yet, he whirled with a high purpose, not wildly but with an energy that took us all to high achievements. He led many romantic music festivals and the Butler Symphony with keen intelligence and artistry, and the students’ good was, without exception, his good. Before its articulation, Jackson gave life to the Butler Way—its downplay of ego and its purpose of selflessness.”

In 2007, Butler honored Wiley with a tribute concert and endowed a scholarship in his name. The Jackson Wiley Scholarship benefits underclassmen pursuing a degree in music, with first preference given to those participating in the Butler Symphony Orchestra.

Wiley was born April 15, 1921, the third of the five children of Joseph Burton Wiley and Katherine Pellet, both teachers. He attended Yale University on a full scholarship, where he produced what he once described as “a totally undistinguished record except in protest political activity.”

He spent four years in the Navy during World War II, with time in Australia, New Guinea, the Philippines, and Japan, where he interpreted for the Strategic Bombing Survey. He earned the Bronze Star for his service.

After the war, he studied at Juilliard and helped form the LaSalle String Quartet with other students. The string quartet achieved a residency position at Colorado College, where Wiley eloped with his first pupil, Jane, and returned to Juilliard.

“Some hard work on the piano made possible a student coaching position in the Juilliard Opera Theatre, where Leontyne (then Mary) Price was in preparation for her initial role as Mistress Ford in ‘Falstaff,’ ” Wiley recalled in 2007. “They were lean years of learning–with help from a willing wife, GI and parent money, and such jobs as cellist in Edith Piaf’s engagement at the Versailles Club, with Radio City Music Hall, and on Bernstein’s ‘Omnibus’ TV programs, great training under Leonard Rose, and playing in the New York City Opera Orchestra.”

After graduation, he freelanced through concerts and recordings under Leopold Stokowski and Thomas Beecham and in chamber music premieres by pianist Russell Sherman and violinist Isidore Cohen. He became involved in jazz as well, playing with Charles Mingus.

“None of the great jazz players we recorded with stayed very long, because Mingus was too determined to write all their improvisations for them,” he recalled. “But Charlie Parker would show up to visit, and John Lewis and Thelonious Monk came to play.”

At 36, Wiley achieved his first salaried position as a conductor with the Springfield Symphony in Ohio, “a feat accomplished seemingly by my turning down their offers of an audition date three times, thereby forcing the president to interview me in Woodstock, N.Y., where I was totally absorbed in a small summer opera troupe.”

The position expanded to include a new youth orchestra and civic chorus, an orchestra at Wittenberg University, a Wittenberg Trio, a column every Sunday in the local newspaper, and a weekly radio program.

Later in his 12 years at Springfield, Wiley made contact with Butler Ballet, which grew into annual visits by Butler’s dance program. When Butler needed a conductor, Jackson Ehlert, dean of what then was called the Jordan College of Fine Arts, called Wiley.

“There were many new possibilities at Butler,” Wiley said. “A Greater Indianapolis Youth Symphony to form, an opera workshop revived, and the Romantic Festival under Frank Cooper in full force, and extraordinarily unusual programs with the Butler Ballet under the guidance and genius of George Verdak.”

After retiring from Butler, Wiley conducted the Indianapolis Philharmonic Orchestra.

He is survived by his wife, Jane; his brothers, Joseph and Steven; his daughter Candida; his sons Scott, Hunt, and Bradford; and his grandchildren, Theodore, Nathaniel, Jackson, Elizabeth, Chloe, and Audree.

In lieu of flowers, charitable donations can be made to:

“Jackson Wiley was a great teacher, with boundless energy, and he will be missed,” Director of Bands Robert Grechesky said. “He mounted, produced, and conducted some amazing performances, participation in which were some of my proudest moments at Butler.”