Butler University is among the Top 100 Social Media Colleges in the nation, according to the website StudentAdvisor.com. 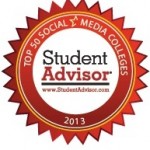 The list is based on a mathematical algorithm that quantifies the social media footprint of each college and university in the United States. Butler is one of the 3 percent of the nation’s colleges and universities that are leading the way in social media best practices in higher education, the website said.

“Social media provides us with another opportunity to distinguish Butler amongst its peers in higher education, so in the past several years we have taken an intentional approach toward our efforts,” said Michael Kaltenmark, the director of web marketing and the social media “voice” of the live mascots. “Obviously, it’s nice to be recognized and as a result, such recognition associates Butler with some elite company.

“As an institution, we are committed to social media and are continually seeking ways to implement the best strategies to make Butler University socially engaging for our students, faculty, staff, alumni, and fans. And as the StudentAdvisor.com ranking suggests, we are proud to have our live mascots lead Butler with regard to the University’s social media presence.”