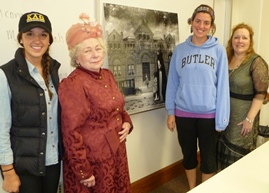 The classes have been studying contemporary issues of gender oppression around the world. Course instructor Ann O’Connor-Ledbetter invited Wahls to talk as a way to highlight similarities between today’s situations and the 19th and early 20th century struggles for women’s rights in the United States.

Wright Sewall, who lived in Indianapolis from 1874-1907, created and led countless local and national organizations aimed at “broadening the lives of women through education and cultural opportunities,” as well as political rights, Wahls said.

Wahls and O’Connor-Ledbetter wore Victorian and Edwardian costumes for the presentation; Wahls’ elaborate pink net Victorian hat replicated one shown in a photograph of Wright Sewall.

That hat covered a tenacious steel trap of a mind, according to Wahls. Wright Sewall was a visionary “organizer of human machinery,” she said, who would “come up with ideas for what needed to be done” and encourage people to form clubs to achieve their ends.

Wright Sewall founded the city’s first college preparatory school teaching the classics to girls; an art association that was the forerunner of both the John Herron School of Art and the Indianapolis Museum of Art; and The Propylaeum, a social and cultural center still active in women’s enrichment programming. (Wahls is a former Propylaeum president and portrays historic characters for various club activities.) Wright Sewall also hosted weekly salons in her home, featuring talks by well-known educators, politicians, and authors such as Booth Tarkington.

In the 1880s, Wright Sewall chaired the National Women’s Suffrage Association and in the 1890s she was president of the National Council of Women of the United States. Later, she and Henry Ford collaborated in an attempt to halt World War I.

Students asked Wahls about other women’s responses to Wright Sewall’s outspoken views. Many women knew they couldn’t speak up, Wahls said—that their husbands disapproved of women voting and might squelch their wives’ activism with physical abuse. Suffragists were often ostracized by family and friends, O’Connor-Ledbetter added.

After all her efforts to earn the right to vote for American women, Wright Sewall never cast a ballot. Wahls said that the 19th amendment to the Constitution, which granted that right, was ratified 38 days after the suffragist’s death in 1920.

O’Connor-Ledbetter is an adjunct instructor in the Colleges of Communication and Global and Historical Studies.