The Center for Urban Ecology Farm at Butler University has a new addition—a mobile classroom where visiting students can learn about the growing operations and participate in farm activities. 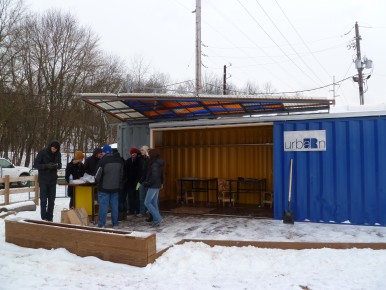 he classroom, which was completed at Butler on December 8, is a former shipping container that was repurposed by Ball State University Professor of Architecture Tim Gray and his third-year students. They equipped the space, which is about the size of a large truck trailer, with movable tables and chairs made from recycled wood, an acrylic canopy for shade, and a rainwater-collection system.

The classroom also has a deck and planters made from recycled, heat-treated lumber.

“We’re grateful to the Nina Mason Pulliam Charitable Trust, which gave us a grant to expand the farm and allow for the farm to function not only as a production facility for veggies but as an educational hub,” said Tim Carter, director of Butler’s Center for Urban Ecology (CUE), which oversees the CUE Farm. “This classroom is an extension of the educational programming activity at the farm. This second sustainable design project at the site—along with the dome—was the next logical step for us.”

In July, the CUE built a covered pavilion using fabric from the RCA Dome roof and recycled/re-purposed materials from other sources.

Gray said the project started with students creating two mobile classrooms for an Indianapolis charter school that was starting a farm. When that school was shut down, he began looking for alternative sites. One classroom wound up at Butler and the other went to Big City Farms, which farms on vacant land adjacent to the Midland Arts and Antiques Market. 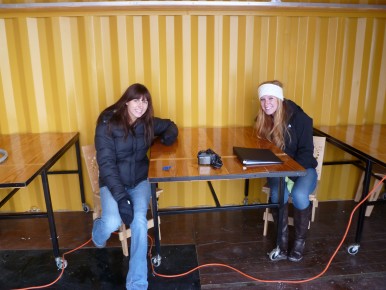 The classrooms are the result of two semesters’ work by 29 students who had a budget of $7,500 provided by Ball State’s provost to complete the project. Gray’s students met with Carter to figure out what the Butler farm needed.

Carter said the partnership with Ball State is exciting, and he hopes to work with Gray and his students again on physical installations associated with MUSE—the Museum of Urban Science and Ecology. The MUSE will be officially launched in 2015 with its first exhibit “Indianapolis/City as Living Laboratory” (I/CaLL), for which the Center for Urban Ecology received a $2.9 million National Science Foundation grant this fall.

I/CaLL will result in the creation of six outdoor spaces for science and art programming in Indianapolis neighborhoods.