Butler University has raised more than $17.156 million to preserve and update its landmark arena, Hinkle Fieldhouse. 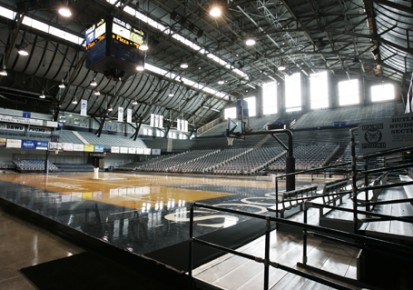 Total gifts and pledges to The Campaign for Hinkle Fieldhouse surpassed the $16 million public fundraising goal announced at the campaign’s launch in November 2012. Butler celebrated the final tally today during its men’s home basketball game against Marquette.

The campaign has funded needed exterior maintenance on the 86-year-old fieldhouse, and ongoing interior renovations. New training and sports medicine facilities, locker rooms, and an academic center for student-athletes are under construction. Next summer, a new scoreboard and seating will be installed in Hinkle’s arena, along with other upgrades to enhance the spectator experience.

“We are extremely grateful to the generous donors who have supported The Campaign for Hinkle Fieldhouse,” said Butler President James M. Danko. “Contributors told us they wanted to honor Hinkle’s historic place in our community, as well as Butler University’s continuing ascent as a nationally recognized leader in collegiate athletics and academics.”

Athletic Director and Vice President Barry Collier said renovations completed and in the works at Hinkle are already improving Butler’s athletic recruiting efforts.  “Prospective student-athletes see that Butler will provide them the outstanding facilities, physical training, and academic support they need to succeed, as well as an enthusiastic fan base,” he said.

“When BIG EAST Commissioner Val Ackerman visited Butler last fall, she was very pleased with the improvements we are making to benefit student-athletes,” Collier said. “She said the Hinkle renovations supported the BIG EAST conference’s dual focus on exceptional competition and education.”

The first two floors will contain a student-athlete center that will feature a strength-and-conditioning room, a comprehensive sports medicine facility, and the University’s first dedicated space for academic mentoring of student-athletes. Some athletic offices will move to the new third-floor level, with all pool area construction to be completed this April.

Simultaneously, Hinkle’s main gym and surrounding concourses will undergo several fan-friendly updates. Approximately 5,000 new chairback spectator seats will be installed from the arena floor level up to the walking track, providing more leg room and better accessibility to aisles. A new scoreboard will have video capability.

Additional concession stands will be built on both main floor and upper levels, and all visitor restrooms will be upgraded and expanded. The Wildman Room, the fieldhouse’s hospitality suite, will be tripled in size.

To allow for the final phase of construction, public access to most of the fieldhouse will be closed from April through the start of the Butler 2014-2015 basketball season in October.

Additional upgrades to Hinkle funded by the campaign include:

Hinkle campaign gifts are still being accepted at www.hinklecampaign.com.